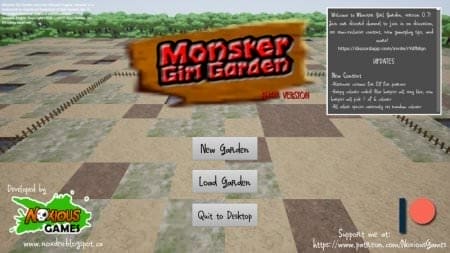 About game
MGG is a gardening/time management game, where the player is given a plot of land to build a garden and attract the various monster girls of the world to come have fun. Creatures will battle, have sex and breed.
Current Password: 5b3R9wJDkAPVeu4R
Milking Machine: 9841864085

Changelog
Completed/Fixed:
[X] Autosave is now complete and fully implemented. For new games you will be asked to turn this option on or off. When loading a game autosave will be off by default, there is now a checkbox beside the Save Garden button which will turn Autosave on or off
[X] Added many screen resolution options to settings menu, using Steam survey data I've added a couple of the most popular monitor resolutions
[X] Added auto-resolution detection if no settings are applied, or if the games current resolution is too big compared to your desktop res. If the game has no resolution fitting your desktop res, 1280x720 will be selected. This can be changed afterwards, of course
[X] Added a button for collapsing/expanding the Journal (J)
[X] Added a new emote "No Path." This pops up when a monster tries to perform an action, but fails to reach it's target
[X] Using/Combining Items now contains a volume to check for collisions, instead of a direct linetrace hit. This means it should be much easier to Use items on Monsters, or to combine items
[X] Fixed a bunch of instances where the Player would be frozen during/after the Pay Debt event, based on certain circumstances, a few instances probably still exist however
[X] Removed Oculus VR prompt, if VR is implemented in the future this is easy to add back
[X] View mode now shows UI prompt reminding you that you are in View mode, and how to exit. Also, swapping to player mode will now pull you out of View mode, if you are in it
[X] Entering View mode while the Tool or Item panel was open freezes the player
[X] A simple AI navigation error began occuring after updating to the newest UE4 version, the Lord's Assistant gets stuck near the train station as she guides you to the garden
[X] Crafting was not removing items if you had exactly the right amount of one material
[X] Upgrading tools was slightly broken, this system is completely fixed now
[X] Harem Interior needs fixing, also Monster prices should be displayed before sale/purchase
[X] Improved the Hoes accuracy, prioritizing weed tufts before trying to accomplish any other actions. The old behavior would occasionally get stuck when looking for actions, and perform no action where one was actually available
[X] Fixed an error which stopped coins from simulating physics before they landed
[X] Fixed an error in several quests requiring certain Monsters to be domesticated, which would credit the Player for visiting monsters instead of only residents
[X] Pay Debt event still fired in failed gardens
[X] Changed the rate of new grass tufts appearing on certain tile types
[X] "Quit to Desktop" button now confirms the choice before closing
In progress/Fixing:
[ ] Pay Debt event will still freeze if the Player is in the Arena when it begins
[ ] Monsters attempt to wander/fight through fences/gates/pens
[ ] Monsters are far too hard to select if they are too close to the outer bounds of your Garden
[ ] Add menu for displaying all Resident monsters (Monster Manager), as well as more detailed information on individual monsters, such as their fighting and sex records
[ ] Player climax still broken
Download links
Warning! You are not allowed to view this text.

Comments 3
Add comment
Information
Users of Guests are not allowed to comment this publication.
Best games
The Twist - Version 0.50 Final Cracked
It's a choice-based dating sim/visual novel game. The game is real-time 3d (not rendered...
Wild Life - Patreon Build 01.07.2022
We live in a mad universe... indescribably vast... full of wonders... and terrors. And amidst...
Glassix - Version 0.73.0
It's a trainer game as well where you play as a teenager who lives with his step-mom and...
Research into Corruption - Version 0.6.5 Fixed
This is a Modded RPG Maker Game to simulate a type of Visual Novel Exploration Corruption...
Good Girl Gone Bad - Version 1.2 (Nat DLC)
You play Ashley and make choices that will affect her story in a meaningful way. Are you a...
Being A DIK - Season 3 - Interlude
A young man, from a low-income family, moves away from his widowed father and his summer love...
Latest comics
This Romantic World
Comic takes place in a reality where the movement of free love never ended. Sex is now casual...
The Avengers
Female members of The Avengers attempt to defeat Thanos, but it's hard to fuck someone into...
The Wayfare Horror
A story of lesbian incest and horror. Welcome to the Wayfare!...
John North collection
John North porn comics and pinup collection....
Our New Best Friend
A kinky transfer student is welcomed to her new school by a trio of dykes....
Completed games
The Legend of Versyl - Version 1.3.5 Completed
...
Oakwood Academy of Spells and Sorcery
...
Sofia Unexpected Meeting
Here is the final version of my short Kinetic/VN about Sofia. As I promised, and as it's my...
Timeless Island + compressed
You play for the guy who just died. Fire elemental Imira offers you a deal to find her an...
Monster of the Sea 3
...
Tinder Stories - Asuka Episode
First episode of our spin-off series “Tinder Stories”. In this episode you will have to help...
© 2017-2022 AduGames.COM | Download adult games for FREE!