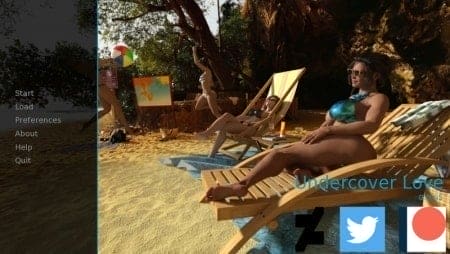 You have traveled abroad for a few years after school. You spent these years doing many things, one being an apprentice to a private investigator. You decided that you want to open your own business, so you decide to go home, only to find out that your parents won't allow you to move back in, so you decide to call up some old family friends and end up moving in with them in a new city. You'll discover that the people around you, and the world at large, is not what you thought it was. A world of magic set in a more modern setting, many mysteries to discover and unravel, and people to meet.

Changelog
This update focuses solely on updating Jeni to her new model, removing old variables that won't be used in the future, rewriting some things that have bothered me for awhile about the early game, or changing renders that I'm not happy with or that used old techniques that I have since found better ways to accomplish. There are also a couple of new scenes, but not the normal amount of new scenes I typically put in.

I've also tested compression and will be exploring better options in the future, but I wanted to get the size of the file down to something more manageable in the meantime and easier on folks who have slower connections.

I've learned how to fix clothing looking like spandex and adhering to the models skin under all circumstances, and I have applied those fixes to some of the older renders, specifically with Claudia as her assets exacerbate the issue. There are more to go, but I will apply those over time so it doesn't take too much time out of my update cycle.

Stats:
130 or so new, fixed or rerendered images.
About 200 lines of dialogue.

Fixes:
Fixed many grammatical errors that I had overlooked. Fixed phrasing in some statements to make it more clear.
Fixed 6 or so images that had clipping issues.
Fixed some images appearing out of order with the conversation in the following scenes - Claudia changing scene after cameras, Evening party scene right before night time transition.

Two new scenes:
Claudia catch up scene - Removed dinner scene. I didn't like how it looked and it seemed too impersonal. Also had some issues posing and rendering so many figures. Got rid of it for a more personal catch up session with Claudia instead. Now some of the other conversations make more sense.

Conversation before first pool meeting with Sasha, with Jeni, spending more time talking to her. This conversation has an important choice that will matter in the Jeni update.

Added option during Yoga scene with Claudia to turn her down if you feel she's moving to fast if you made the choice to go find Sasha during evening party. This adds some additional dialogue with placeholder images.

Compression:
Experimenting with different compression methods. Currently compressed this update using conversion to JPG's over PNG's. I do notice a slight quality loss that I'm not too happy with, but it's 500 megs vs 1.7gigs. I'm going to continue to look for a better method that is lossless vs the lossy method I've used for this update.

Known issues:
Clipping during one of Claudia's scenes after coming downstairs.
Two out of focus images at the end of the party scene that I need to spend the time and rerender.
Download links
You can download games from keep2share, fboom or uploaded using links below. If you want to use MEGA, Google drive or Workupload, you need to be in AduGames friends user group. About this read in FAQ here https://adugames.com/faq.html

Comments 0
Add comment
Information
Users of Guests are not allowed to comment this publication.
Best games
Chloe18 - Back To Class - Full
Finally Chloe is getting back to her Student life, and for that I set a huge Poll for all my...
My Cute Roommate - Version 1.6.1 Extra Final
Finally came the day where our protagonist graduated from high-school. Now it's time for...
Being A DIK - Version 0.6.1 + compressed
A young man, from a low-income family, moves away from his widowed father and his summer love...
Dreams of Desire - Episode 12 Version 1.0.3
You play as the middle sibling of a family living together with Mom, an older and a younger...
View of Family - Version 0.1.4
"View of family" is a pov, rpg game with some kind of open world... in perspective....
Dating my Daughter - Version 0.21.5 Extras
You’ll assume the role of a divorced father who hasn’t seen his daughter in years. Now that...
Latest comics
Star Wars: A Complete Guide to Wookie Sex 1-4
Star Wars sex parody with new and old heroes of the universe....
Protectron Squad Alpha
A new interactive science fiction comic is on the horizon. Take part in voting polls starting...
This Romantic World
Comic takes place in a reality where the movement of free love never ended. Sex is now casual...
The Inner Joke
The Joker is raping and corrupting all the heroines of Gotham City, and even the Batman seems...
Avatar XXX Book One and Two
Divided into two parts (books) short adult comics about Avatar....
Completed games
NTR Origins: Moreau Again, Naturally
This is the third installment in a planned 4-part series of NTR origin stories that follow the...
The case of wife Yukiho (reupload)
A university student protagonist Yuu has a crush on a wife named Yukiho living in the same...
Desecration Of Wings
...
Sword of Wonder - Version 0.99
You play as a shipwrecked merchant, struggling through the rain...until you meet the Lady. See...
Life with Mary - Version 1.0.2 Completed
Guy lives a life with few worries, till his best friend asks to allow his daughter to live...
Elana Champion Of Lust - Chapter 1-3
Elana Champion of Lust is a game where you will have to bring back the natural order to an...
© 2017-2021 AduGames.COM | Download adult games for FREE!