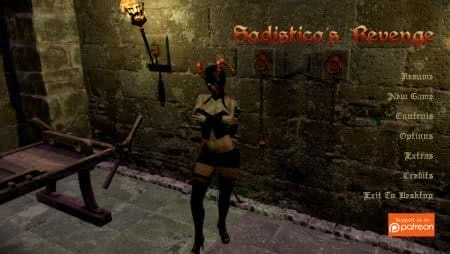 Play as a kinky Succubus out to settle the score with those that betrayed her. Gain power from sex and kinky activities and hunt down powerful sex artifacts from a long lost civilization.

Changelog
Changes + Features Added:
-Control schema has been changed. Camera will auto rotate without using RMB, cursor is no longer on screen during regular game-play, interactables will work based on being oriented in the center of the camera view with Player facing them within proximity. Interactables/usables button has changed to 'E'. Shield has changed to RMB. (Change made due to Patron voting result).
-Added zoom to the main camera.
-Added Controller Support (Based on Xbox controller layout). - To activate, use the toggle in the in-game menu. - For info on the button layout, see the Controls section of the Main Menu.
-Added numbering to dialogue responses when there are multiple options that correspond to the number keys 1, 2, 3, and 4 that can be used to advance respective response as an alternative to clicking on them.
-Masturbation is now done using 'M' key since the cursor is no longer on the screen to click the button.
-Resolution options will now be available before the game loads.
-The 'Enter/Return' button will work to progress both Player and NPC dialogue, for Player, 'Enter/Return' defaults to 1st dialogue response option.
-Added toggles in the In-Game menu to flip mouse X-Axis and Y-Axis independently.
-Improved Controls-Menu organization
Bug Fixes:
-Script in dialogue sequences now have higher priority – should fix the getting stuck on dark screen bug reported for Walled-Damsel scene.
-Fixed Spirit dialogue logic when talking to her for the 2nd time.
-Spell casting and attacking is now disabled while in dialogue.
-Escape key doesn't pause the game or bring up the in-game menu while in dialogue or if another different UI window is open. If dialogue or UI is open, escape will work to cancel dialogue or close the UI. If no other UI is open, ‘Escape’ key will open the in game menu.
-The Player now returns to the main menu upon death.
-All database variables are now reset after dying and everything in the scene should be properly reset once returning from the main menu. - This should fix stuck dialogues etc.
-Sady will now check if she has her whip equipped after the Thrall Girl scene and automatically re-equip it if it isn't already equipped before the fight so she doesn't start combat unarmed.
-Fixed Stat-point exploit after leveling.
-The continue button will now progress via 'Enter/Return' button on initial NPC dialogue prompt.
-Shield can no longer be used during dialogue and will be disabled if active on dialogue start.
-Fixed camera rotation sometimes getting stuck after the end of Wall-Damsel scene.
-Fixed heel sounds not playing while controller was being used.
-Fixed Player portrait sometimes not showing up during dialogue.
-Fixed issue with Walled Damsel scene not playing correctly if Player previously had sex with the Perv Skeleton.
-Fixed issue where Sady couldn’t masturbate after having Sex with Perv Skeleton.

Comments 0
Add comment
Information
Users of Guests are not allowed to comment this publication.
Best games
The Tyrant - Version 0.9.1 + compressed
The game will about the son who returns from his year as an exchange student. It was his last...
Man Of The House - Version 1.0.2c Extra
In this game you will play as a young adult, who is living together with his attractive...
My Cute Roommate - Version 1.6.1 Extra Final
Finally came the day where our protagonist graduated from high-school. Now it's time for...
Research into Corruption - Version 0.6.5 Fixed
This is a Modded RPG Maker Game to simulate a type of Visual Novel Exploration Corruption...
Summertime Saga - Version 0.20.1
After his father died leaving his mother, sister and him behind, their father's death...
Treasure of Nadia - Version 42072
Treasure of Nadia is the followup to Lust Epidemic. In Treasure of Nadia you take control of a...
Latest comics
Deserter
Shot parody comics about sex adventures. She-Ra and the Princesses of Power....
S.EXpedition
Really long comics about space adventures, crazy sex with monster girls and even some plot...
Scrawled
My webcomic "Scrawled" has finally begun! I've been working out what I want...
Emotion Sickness
Ongoing porno parody comics about Teen Titans and their sex adventures....
Symbiote Queen - Part 1-3
Sexy parody comics series about Spider-man and Symbiote sex confrontation. Completed part 1-3...
Asschucks - Part 1 and 2
Crazy incest comics from Milftoon. Completed part 1....
Completed games
Flute of Shame
The protagonist is not by his own will becomes a witch hunter. Paladin begins prepare him for...
Punished Mai - Version 2.4.4
Mai is a 28 years old young woman with a sad and dark past from which she remember almost...
Office Seduction - Version 0.4 Final
...
The Night - Version 1.0
The Night - Monthly Mini Game Release. I'd like to introduce you to the 1st monthly mini...
The Magic Book
Sherman Goofy and Kimberly Dixon find a magic book filled with different spells that will help...
Framboise and Mystery Forest
...
© 2017-2020 AduGames.COM | Download adult games for FREE!