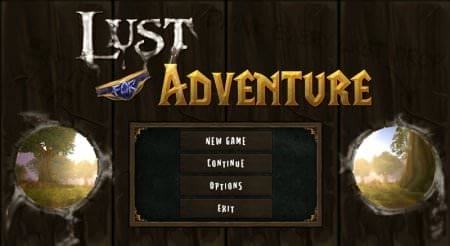 About game
Hi everyone, I'm Sonpih, and I'm creating an adult game called Lust for Adventure, this is a 2D RPG game based on the world of Warcraft where you are an adventurer in search of fame, fortune and obviously sex! The inspiration for this game came from other adult games like "Corruption of Champions" or "Trials in Tainted Space", games where you have a sense of freedom in a world of monsters and sex. In this game you can create a character with some customisation options, complete quests for NPCs, fight (or fuck) different enemies in turn-based combat, and experience multiple events.
Cheat code : jamal (not tested may be old one)

Changelog
New customization options
Humans now have 3 new hairstyles, 3 head shapes with African/Asian/Caucasian features, and 3 beard options for the male. Pale and black skin colors have been updated, and two faces have been changed, they no longer are based on your age. Nipples now look better.High Elves now have 3 new hairstyles, 3 ear shapes for male and 2 for female, 3 beard options for the male, and you can choose to have normal eyes. If you choose the human ears in the male elf, your brows will change to make you look more human, effectively allowing you to play as a twink. Nipples now look better. NOTE: existing elves will have human, blue eyes when you load your game, if you want to get the elven eyes again go to Etheria to change them.
Multiple fixes have been made to the character model, now the ass/cunt can be posed better, and the connection between the body and the cock/boobs should be seamless when there is light in the scene.
Transmog system
Now you can talk with Etheria in the Mage Quarter to change the look of your equipment without changing the stats, with the added bonus of being able to change the upper and lower parts of your armor individually. Once you change your appearance your armor will look the same even if you equip a different item, if you want to reverse the change just select your equipped armor in the Transmog option of Etheria. In the appearance window the button of the piece you changed will be purple.
Jamal Date
Once you get fucked by Jamal (not when you only suck him), you'll be able to have a small date with him, and depending on the right answers you give him during the date you'll get a different scene with him. If you get the most romantic ending he will treat you better from that point forward.
Sex Scenes
Brox and Osborn have a new scene (you fuck them) that you can trigger during their mini-gamesThe solo scene in the Gym showers and the milking chair in Westfall are now animated for the male characters.
Male asses now move better in the animated scenes.
Lighting has been improved in most of the scenes.
Scenes should finally load faster!
Items
New Orc armor added, it has a drop chance from the Northshire Orcs.New Bandit armor added, it has a drop chance from the Goldshire Bandits.
Quests
The Draenei wrestlers now have a button on the quest log to see the progression of their quest.
Armor, Underwear and Weapon vendors will now sell quest rewards, but only if you completed the quest, allowing you to get the other version of the Armor/Underwear that you didn't receive.
Sound
Walking and door sounds implemented for when you move between zones or enter a building.
One of the sex sounds has been tweaked to make it more in sync with the animation of the scene.
Misc.
Ryan animated scenes have been added to the Cheats menu.Zoom feature has been implemented in the Character creation, Barbershop, and Transfig vendors.
The character creation has been updated with all the new options, including all the available hairstyles.
Fix.
Male elf dick fixed in the Malfurion scene.Lust bolt no longer leaves the Harvest Bots at 0 health without killing them.

Comments 4
Add comment
Information
Users of Guests are not allowed to comment this publication.
Best games
Good Girl Gone Bad - Version 1.2 (Nat DLC)
You play Ashley and make choices that will affect her story in a meaningful way. Are you a...
My Cute Roommate - Version 1.6.1 Extra Final
Finally came the day where our protagonist graduated from high-school. Now it's time for...
F.I.L.F. - Version 0.11c
You the main character come home from a long time away. Greeted by your mom and sister you...
View of Family - Version 0.1.4
"View of family" is a pov, rpg game with some kind of open world... in perspective....
The Twist - Version 0.39 Final Cracked
It's a choice-based dating sim/visual novel game. The game is real-time 3d (not rendered...
Treasure of Nadia - Version 42072
Treasure of Nadia is the followup to Lust Epidemic. In Treasure of Nadia you take control of a...
Latest comics
Deserter
Shot parody comics about sex adventures. She-Ra and the Princesses of Power....
S.EXpedition
Really long comics about space adventures, crazy sex with monster girls and even some plot...
Scrawled
My webcomic "Scrawled" has finally begun! I've been working out what I want...
Emotion Sickness
Ongoing porno parody comics about Teen Titans and their sex adventures....
Symbiote Queen - Part 1-3
Sexy parody comics series about Spider-man and Symbiote sex confrontation. Completed part 1-3...
Asschucks - Part 1 and 2
Crazy incest comics from Milftoon. Completed part 1....
Completed games
Elana Champion Of Lust - Chapter 2-3
Elana Champion of Lust is a game where you will have to bring back the natural order to an...
Second Chance - Version 1.0 + compressed
In order to attend college, A young man must move in with a former role model that abandoned...
Daughter For Dessert - Version 1.0 (free)
...
Fetish Stories: The Asylum
...
My Sister Mia - Version 0.5 Act 1
...
A Night With Liara - Version 1.0 Completed
Preform various sex act with Liara T'soni from Mass Effect!...
© 2017-2020 AduGames.COM | Download adult games for FREE!