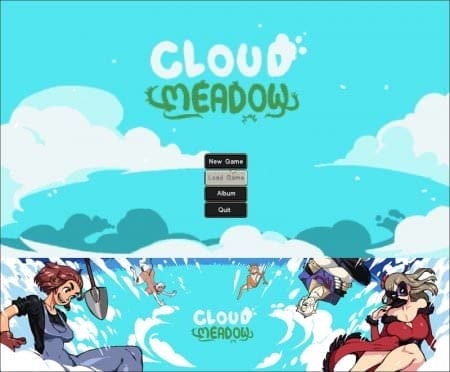 About game
Cloud Meadow is a hybrid farming sim dungeon crawler, where the player can choose the solitude of a quiet sky high farm or the rushing adrenaline of a raging battle inside abandoned ruins, both of which benefit one another. Experience thrilling turn based combat versus a variety of enemies, using your own raised monsters, allies and an array of skills.

Explore a huge variety of locations and hidden areas throughout the ever expansive world of Cloud Meadow. Among the three major towns the player will be able to fully navigate through it to discover quests, new npcs , stories and the lore behind the game. Farm to your hearts content and exchange your produce for goods and services, complete quests and raise your farms production! Breed and discover a large variety of monsters whom you can breed with one another AND breed with! Explore a shattered world, where civilization makes its place among the clouds atop floating islands. Explore dungeons filled with exotic plants and dangerous monsters to capture and return to your farm with.
Gallery Code: Barrel o Booze
Cheat code: Washboard Abs
Changelog
Changes
Dungeons no longer reset if you haven’t completed the first dungeon quest.
Nerfed enemy scaling by 40%
Enemies scale more with the current floor than the player level
Nerf the random random of enemy bonus swiftness from “0 to 5” to “-3 to 3”
Monsters that are unavailable will have their status mentioned in the tooltip
Changed first cooking tutorial from Shrubstick Tendies to Baguette, also gave the player the correct recipes & some additional Shrubstick Seeds
Players who have previously completed or skipped the cooking tutorial will receive some bonus Shrubstick Seeds
Message and item prompts will now last longer (2 seconds, was 1 second)
Fixes
Fixed all monsters disappearing when the player has more monsters than barn capacity - however the extra monsters will not be available and may leave the farm due to neglect.
Fixed all inventories acting like the food bin after using it.
Fixed not being able to remove items from the food bin.
Fixed items not being removed from the shop inventory when being bought
Fixed Jerkian’s collisions on the market day not letting the player in and out of the Union Barrack.
Fixed an issue where you could buy unlimited amounts of items
Fixed monsters bought from Jerikian having a blank palette
Fixed monsters already having a blank palette with a consistent check
Fixed doors in the dungeons reappearing when they shouldn’t.
Doubled the wait time to unstop the player from moving from 1/20 of a second to 1/10 of a second
Fixed the Mill not correctly producing refined items.
Fixed the Mill not confirming that you received refined items.
Fixed Jobs eating monsters, the entire monster job system was remade from the ground up to promote stability.
Fixed an issue when monsters abandoning the farm during the night would cause an endless sleep loop
Fixed an error caused by talking to Montalvo
Fixed an issue where monsters would work twice as fast as normal.
Fixed an issue where monsters would only work on 2/3rd of the field.
Fixed Eve x Female Holstaur animation showing Evan x Female Holstaur
Zooming the camera while the player is sleeping should be centred on the bed
Corrected materials on Farm Mill building and Food Bin
Download links
You can download games from keep2share, fboom or uploaded using links below. If you want to use MEGA, Google drive or Workupload, you need to be in AduGames friends user group. About this read in FAQ here https://adugames.com/faq.html

Comments 27
Add comment
Information
Users of Guests are not allowed to comment this publication.
Best games
Dreams of Desire: The Lost Memories
A side-story starring Tracy that details the events of the main game from her perspective....
The Twist - Version 0.39 Final Cracked
It's a choice-based dating sim/visual novel game. The game is real-time 3d (not rendered...
Good Girl Gone Bad - Version 1.2 (Nat DLC)
You play Ashley and make choices that will affect her story in a meaningful way. Are you a...
Treasure of Nadia - Version 42072
Treasure of Nadia is the followup to Lust Epidemic. In Treasure of Nadia you take control of a...
Lancaster Boarding House - Final version
The game places you in a Boarding House somewhere in the US along with other young adults and...
My New Life - Version 2.1 + Extras Jack's Life
You will assume the role of a young person in your city where you live the hottest situations....
Latest comics
Deserter
Shot parody comics about sex adventures. She-Ra and the Princesses of Power....
S.EXpedition
Really long comics about space adventures, crazy sex with monster girls and even some plot...
Scrawled
My webcomic "Scrawled" has finally begun! I've been working out what I want...
Emotion Sickness
Ongoing porno parody comics about Teen Titans and their sex adventures....
Symbiote Queen - Part 1-3
Sexy parody comics series about Spider-man and Symbiote sex confrontation. Completed part 1-3...
Asschucks - Part 1 and 2
Crazy incest comics from Milftoon. Completed part 1....
Completed games
Office Seduction - Version 0.4 Final
...
Cuckold Simulator
Try yourself in the role of a “boomer” drinking green energy, while simultaneously satisfying...
Bad Manners - Episode 1-6
Do you really think the Prince Hans story (Disney's "Frozen" movie) is over?...
Framboise Errands
...
My Girlfriend’s Amnesia - Completed
The game places you in a situation where your girlfriend suffered a car accident and now...
Futanari Sorority - Completed
...
© 2017-2020 AduGames.COM | Download adult games for FREE!