Tales of the Exiled - Version 0.27
Information 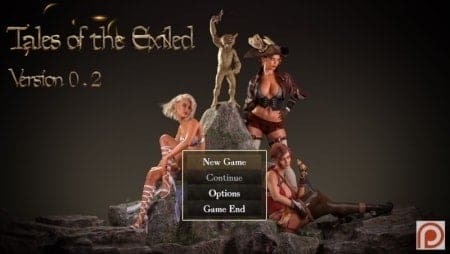 Name: Tales of the ExiledGenre: 3DCG, Male protagonist, Fantasy, Adventure, Corruption, Oral sex, Footjob, Big tits, Humiliation, Teasing, Monster girl, Vaginal sexVersion: 0.27 - Download Android version 0.27 from AdultAPK.com for free!Censorship: NoAuthor: ColdCatLast updated: 31 July 2021Language: EnglishMade in: RPGMSize: 525 MB 7Z / 716 MB UN7Z
About game
Tales of the Exiled is a goblin-themed fantasy adult RPG that takes inspiration from the story and settings of old school CRPGs such as Baldur's Gate. The game takes place in the fictional realm of the Last Continent, a remnant of the Great War that occurred over two centuries ago. Inhabited by all manners of demonic creatures, supernatural beings, and hot girls, the magical world is filled with diverse environments for the player to explore. You play as Luga, a young goblin who has been exiled from his village in search of the illusive Alchemist's Stone, a legendary magical artifact that is said to grant to wielder unlimited power. Throughout his adventure, he will meet new friends, defeat sinister villains, and discover the true history of his heritage...
Changelog
v0.25
New Character - Vendor Lady
New scenes with Vendor and Miel
New combat skill - Fire Slash (lvl. 4)
Combat animations - MC's battle sprites are no longer static images. Idle, attack, and damage sprites now have animated sequences
Revamped Difficulty - combat has been revised to make encounters easier
Sword of Tritons - now an equipable weapon with additional stats, along with attack effects and sound
Various bugfixes
Download links
Warning! You are not allowed to view this text.

Comments 0
Add comment
Information
Users of Guests are not allowed to comment this publication.
Best games
Milfy City - Version 0.71b + compressed
A young student finds himself in the school therapist office, after a humiliating moment with...
Man Of The House - Version 1.0.2c Extra
In this game you will play as a young adult, who is living together with his attractive...
Dating my Daughter - Version 0.14.5 (free)
You’ll assume the role of a divorced father who hasn’t seen his daughter in years. Now that...
Dating my Daughter - Version 0.21.5 Extras
You’ll assume the role of a divorced father who hasn’t seen his daughter in years. Now that...
Good Girl Gone Bad - Version 1.2 (Nat DLC)
You play Ashley and make choices that will affect her story in a meaningful way. Are you a...
Acting Lessons - Version 1.0.2 Extras + compressed
The story centers around you, a middle-aged man with a background in cryptocurrency trading,...
Latest comics
This Romantic World
Comic takes place in a reality where the movement of free love never ended. Sex is now casual...
The Avengers
Female members of The Avengers attempt to defeat Thanos, but it's hard to fuck someone into...
The Wayfare Horror
A story of lesbian incest and horror. Welcome to the Wayfare!...
John North collection
John North porn comics and pinup collection....
Our New Best Friend
A kinky transfer student is welcomed to her new school by a trio of dykes....
Completed games
Timestamps - Chapter 1 - Unconditional Love - Version 1.0 PE P1
You're a college student who's lustful desires have caused you to make horrible mistakes. But...
My Cute Roommate - Version 1.6.1 Extra
Finally came the day where our protagonist graduated from high-school. Now it's time for him...
Family At Home - Final
This game tells the story of a young boy named Alonso. He will visit his aunt, Victoria, at...
Fashion Business - Episode 1
...
Summoner's Legacy - Version 1.0 Elite + compressed
You're the descendant of the infamous occultist Aleister Crowley, and coincidentally you also...
Apocalypse Mutant Erotica
Embark on a road trip in a post apocalyptic world, threatened by mutants and scavengers. Make...
© 2017-2022 AduGames.COM | Download adult games for FREE!