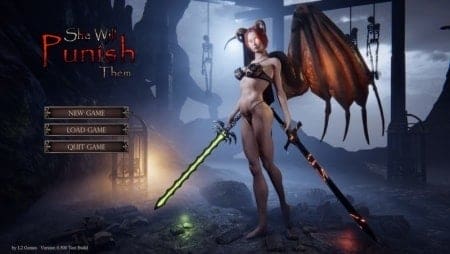 A dark fantasy ARPG that let you engage in brutal and gory combat in the demonic realm. Play as the gorgeous but deadly Succubus. Grind your way through enormous amount of horrifying abominations and bosses, until she becomes the most formidable and seductive devil.
Changelog
v1.781 - 1.783
Hotfixes.

v0.780
We have officially enabled the Steam Workshop. It is the first step to the modding support of this game. You cannot mod the game yet since we have not released any official modding tools yet. But you can already download two test mods we uploaded to the workshop.

And the next step for the modding implementation is to release the official modding tools to the public, test it and gradually add features to it. Similar to the game itself, the modding tools require plenty of time to make, test, and polish. So we figured it will be a good idea to start it early in the development and have it grow with the game itself.

Added several new companions. You will get them from the rescue mission, which will appear on the world map after some time.
Added a new faction: The Orcs (WIP)
Added the balance parameter to determine whether the Succubus should stagger when hit.
Added two new maps: Venom Den and The Misty Den.
Added the expression controller when posing.
Added more than 10 new lingerie.
Added a few armor sets.
Added more than 10 new pieces of furniture.
Added a few higher-level weapons.
Moved most of the Smuggler items to the loot pool.
Added confirmation window when you click the return to main menu button.
Tweaked strength attributes to scale with player's damage.

Bug Fix: Certain type of bows doesn't work.
Bug Fix: The inverted controller bug.
Download links
You can download games from keep2share, fboom or uploaded using links below. If you want to use MEGA, Google drive or Workupload, you need to be in AduGames friends user group. About this read in FAQ here https://adugames.com/faq.html

Comments 0
Add comment
Information
Users of Guests are not allowed to comment this publication.
Best games
Fashion Business - Episode 2.2 - Version 3 + compressed
This Game is about Monica. Monica is a "Rich B*tch". Monica is the Boss. Most of all Monica...
SuperPowered - Version 0.44.04 + compressed
In the game, you play as Billy, a young man still living with his mom. At the very beginning...
Being A DIK - Version 0.7.2 + compressed
A young man, from a low-income family, moves away from his widowed father and his summer love...
Acting Lessons - Version 1.0.2 Extras + compressed
The story centers around you, a middle-aged man with a background in cryptocurrency trading,...
Big Brother - Version 0.13.0.007 (Cracked+Mod) (FREE)
Main character - Max, young guy who is living in poor family with mother and two sisters....
A Wife And Mother - Version 0.130 + compressed
My game is a choice-based VN, where you take the role of Sophia Parker, a happily married...
Latest comics
This Romantic World
Comic takes place in a reality where the movement of free love never ended. Sex is now casual...
S.EXpedition
Really long comics about space adventures, crazy sex with monster girls and even some plot...
Peach Sex Odyssey
The princess wants to experience new sensations, but will Mario help her or hinder her?...
The Poker Game 3 - Full House
Lexi is looking for answers to why she ended up fucking Herbie’s friends during the last 2...
Zombie
Small comics about horny zombies and sexy girls....
Completed games
Lab Rats - Version 1.0 Free
...
Last Days Of The Universe - Final
...
Wolf Tails - Completed
...
The Artifact Part 3 - Completed
...
A Favor For A Friend
A choice based visual novel by ntrgames, This is a standalone release and has nothing to do...
What's Mine Is Yours - Version 1.2 + compressed
A married teacher's life is turned upside down when his wife reveals that she is wants him to...
© 2017-2021 AduGames.COM | Download adult games for FREE!