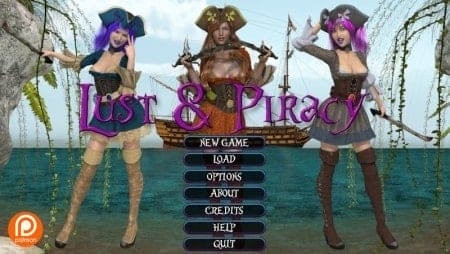 About game
You are a university Literature Professor and a Brother in the forbidden Order of Light, who sets off on a summer research expedition about pirate lore, which becomes a much larger adventure than originally planned. Your three best students, Britta, Saga, and Signe (twins), all sexy, bright, young ladies, are accompanying you on this voyage as an optional, special topics course.
Lust & Piracy is set in a dystopian world where the Global Corporate Council (GCC) has taken over all major governments, dictating every aspect of the global society, including business, religion, laws, and the slave trade. While your intention is to avoid involvement in the depressing society at large, you will find it more and more unavoidable to play a role in humanity's struggle.
Aside from Britta, Saga, and Signe, you will meet and have the opportunity to become sexually and romantically involved with numerous other girls along your voyage.
Changelog
REQUIRES NEW GAME!!!

Added quest log and triggers, so continuing from a save will likely cause you to miss some things without any notification of errors.
Introduction of two new non-love-interest characters.
Added playtime display in Ship’s Log.
The new story content in this version is the continuation of the opening, with the MC returning to pick up Britta, Saga, and Signe. Regular open world gameplay is planned for the next release.
Converted most png images to jpg, reducing the game’s file size dramatically. Will be exploring different audio formats to see if I find any to be satisfactory to reduce those file sizes in the future without sacrificing quality.
Some general editing that does not alter the story.
Blackjack may still have some bugs, so it is advisable to save before playing it. Twice while play testing I have run into an issue where one or two cards were not cleared after the hand and remained on the screen (and I think it also miscalculated the hand total when this happened). Have not found the error in the code despite detailed inspection, so I must spend more time finding what detail I’m missing.

Some of the work to be done for the next version includes:
- making cabins for girls
- setting up custom dive gear and swimwear for the girls
- making new shaders/textures for the wave system - it was designed for an earlier render engine and did not convert well to work with iray, so will be trying out making a multi-layered shader and making a new primitive prop base to which the original wave system deformers will be applied
- some of the existing beach scenes have flaws that will need to be fixed, partly because of the poor quality of the converted wave system, partly because of other mistakes; depending on how smoothly everything goes, those scenes may be redone for the next version - redoing these flawed scenes is the ideal plan for overall consistency
- planning to add some more repeatable activities, including treasure diving, as the intention is for the next version to NOT have a hard cutoff
Download links
You can download games from keep2share, fboom or uploaded using links below. If you want to use MEGA, Google drive or Workupload, you need to be in AduGames friends user group. About this read in FAQ here https://adugames.com/faq.html