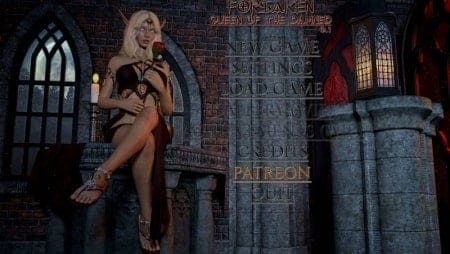 About game
You play as the middle child of a noble elven family who is renown for their mastery in archery. You live happily with your siblings and lover, until one day your sisters decide to leave to help out other races. You are left alone, as the burden of defending your home and living up to your family name becomes that much harder. You will face a lot of difficult decisions, which will shape how others see you and how your character ends up being, good or evil. The choice will be yours.
Changelog
- Over 300 new renders (200+ scenes and animations)
- 4 new sex scenes (1 Legend patron exclusive)
- Fetishes in this update include: Prostitution, Submission, Foot Fetish, Lesbian, Dominatrix, Humiliation, Threesome
- Gallery added. Once you see a sex scene, you can replay the whole scene in there.
- Achievements added + hidden world collectables added with point based system which could be improved in the future to be used to unlock certain things like special renders etc. WIP.
- World Map added and exploration. Keep in mind SOME AREAS of it ARE still WIP and have nothing to do yet.
- Romance points and relationship menu added.
- Quest log added with hints on what to do next to progress.
- Changed the return arrow and moved it top right.
- Added a day count in the inventory.
- Redesign of the majority of the ingame UI. Made everything more neat and pretty to look at. Moved the essential things in "Inventory" so it doesn't clutter the main screen. Also changed the Good/Evil bar and made it horizontal under the textbox.
Changed quick menu font and made the color to change to white/grey whenever a dialogue is in progress and yellow/orange whenever you are free roaming. This is done so to not annoy your eyes when you are reading through the dialogue.
- Fixed/Improved the nude MC face on her Undead main menu screen.
- Added outlines to "Toggle interface" quick menu option.
- Added text under each UI icon on the main screen indicating its purpose.
- The first main QUESTline and DAILY QUEST added.
- Main storyline quests will progress on their own once you finish a certain thing, it will automatically unlock the next. For hints and guide, check the "QUESTS" icon
- CRITICAL HIT, a small chance to do critical damage to the opponent during a fight. Added only to fights after the prologue.
Sinisa's fight include more mechanics, such as a chance for her to block your attack and for her to strike you regardless if you dodged.
- Fixed grammar mistakes and other dialogue errors from the previous version.
- Added new music for different areas and scenes.
- Added a new launch icon for when you first start the game with progress loading bar.
- Added Twitter button in the main menu.
Download links
Внимание! У Вас нет прав для просмотра скрытого текста.

Comments 0
Add comment
Информация
Посетители, находящиеся в группе Guests, не могут оставлять комментарии к данной публикации.
Best games
Dating my Daughter - Version 0.21.5 Extras
You’ll assume the role of a divorced father who hasn’t seen his daughter in years. Now that...
Glamour - Version 0.43
Main character (a guy or a girl, your choice) from a small town turns 18 and it's time to go...
The Secret Reloaded - Version 0.4.3a Christmas Edition + compressed
Moving means troubles, worries and lots of wasted money and nerves. But not with Mary. When my...
Man Of The House - Version 1.0.2c Extra
In this game you will play as a young adult, who is living together with his attractive...
House Party - Version 0.20.3 (x64)
The House Party game is similar to a lot of the browser-based games where your choices...
The Tyrant - Version 0.9.4 + compressed
The game will about the son who returns from his year as an exchange student. It was his last...
Latest comics
Peach Sex Odyssey
The princess wants to experience new sensations, but will Mario help her or hinder her?...
Mercenary Breeder
Ongoing fantasy comic....
This Romantic World
Comic takes place in a reality where the movement of free love never ended. Sex is now casual...
The Poker Game 3 - Full House
Lexi is looking for answers to why she ended up fucking Herbie’s friends during the last 2...
S.EXpedition
Really long comics about space adventures, crazy sex with monster girls and even some plot...
Completed games
Lida's Adventures - Part 1 - Version 0.10
...
Hard Work
Gary Stuart, better known as "The Man," and his elite team of sexual counselors are...
Lily's Handmaid- Version 1.0.1
Yuri (girl x girl) visual novel. Sarah gets an unexpected job offer to work as a maid for the...
Leap of Love - Version 0.1.42
This is a fantasy game where you play as Kaheroux a frog turned prince by a shady wizard. The...
Dark Neighborhood - Completed Chapter 1
...
My Sister Mia - Version 0.5 Act 1
...
© 2017-2021 AduGames.COM | Download adult games for FREE!