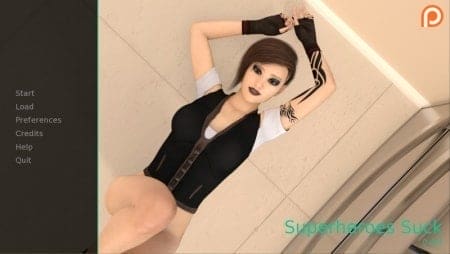 You’ll play as a man teetering over the edge of boredom right before the opportunity of meta-human abilities comes to rescue him from his day-to-day life, and thrusts him into the crime-fighting theater of being a superhero! Eventually, he needs to meet his team first. Action! Romance! Lewds! All powered by the hamster currently spinning the workout wheel on my rendering machine.

Changelog
Start a new game
The Academy has received a visual overhaul
Redesigned the first floor corridor (added elevator access)
Added an in-game blackboard to track the common schedules
Redesigned the Locker Room
Redesigned the Main Menu
Added a game icon
Redesigned the Hint images
Updated the Main Menu images
Touched-up the Introduction
Replaced the old Introduction Hospital Scene
Replaced the old Academy Tour
Replaced Chrys' 1st Event
Replaced Lecture 3 Slideshow Animation with a real animation
Replaced Harper's 4th Event and Animations (now two)
Replaced Harper's 5th Event and Animations (now two)
Replaced Chrys' 6th Event and Animations (the last slideshow)
Replaced Valentina's 8th Event (Animation removed because it was low-quality and no longer fit the scene.)
Replaced hundreds of old renders with the newer backgrounds
Updated half a dozen old animations with the newer backgrounds
Added almost a dozen new tracks the game
Added music to dozens of scenes
Added over thirty new sound effects to the game
Added sound effects to nearly every scene
Added a "leave" button to replace the old room exit highlights. Updated events to trigger off the new button
Added an in-between state for the elevator hallway before Riley moves back into the Academy
Shuffled a lot of the code around to make it easier to add new content
Updated and replaced too much code to mention
Fixed Attributions
Added new Patreon buttons
Fixed a bug with Riley's bathroom repeatable event
Redone a few hints to be a little less vague
Locked the player in the sequence where Chrys ambushes you so that you don't skip it accidentally
Added an in-game change-log.
Finished Sumire's Redesign
Finished Keegan's Design
Finished a Design for Mister Nakamura
Finished a Design for a mystery character you'll meet soon
Updated the dialogue of several events to be more internally consistent
Changed the wording on picking your name to be more clear. Also added a default name. It's a reference, there is no "canon" protagonist.
Hotfix: Fixed a minor bug that occurred when you tried to repeat Harper's oral event when speaking to her in the doorway.
Hotfix: Fixed a bug that occurred when accessing Valentina's and Harper's repeatable events and then backing out.
Hotfix: Fixed an incorrect schedule time slot
Hotfix: Fixed a bug with a dialogue option during Chrys' fitting room event.

Comments 1
Add comment
Information
Users of Guests are not allowed to comment this publication.
Best games
Glamour - Version 0.36
Main character (a guy or a girl, your choice) from a small town turns 18 and it's time to go...
A Wife And Mother - Version 0.115 + compressed
My game is a choice-based VN, where you take the role of Sophia Parker, a happily married...
SuperPowered - Version 0.42.00 + compressed
In the game, you play as Billy, a young man still living with his mom. At the very beginning...
Wild Life - Build 16.04.2021
We live in a mad universe... indescribably vast... full of wonders... and terrors. And amidst...
My New Life - Version 2.1 + Extras Jack's Life
You will assume the role of a young person in your city where you live the hottest situations....
Dreams of Desire: The Lost Memories
A side-story starring Tracy that details the events of the main game from her perspective....
Latest comics
The Poker Game 3 - Full House
Lexi is looking for answers to why she ended up fucking Herbie’s friends during the last 2...
This Romantic World
Comic takes place in a reality where the movement of free love never ended. Sex is now casual...
Star Wars: A Complete Guide to Wookie Sex 1-4
Star Wars sex parody with new and old heroes of the universe....
Protectron Squad Alpha
A new interactive science fiction comic is on the horizon. Take part in voting polls starting...
The Inner Joke
The Joker is raping and corrupting all the heroines of Gotham City, and even the Batman seems...
Completed games
Tales Of Aravorn: Cursed Lands - Version 1.0.11
A mysterious mist has spread over the plains surrounding the Castle of N'Mar, and the...
Cuckold Simulator
Try yourself in the role of a “boomer” drinking green energy, while simultaneously satisfying...
Wetpussynen
Wetpussynen is a little xmas game, in which you can live two stories on the theme of...
Escape From The Hospital - Version 1.0
Escape from the hospital is a small quest puzzle game. In this version you have to pick up the...
Crystal - Part 1-3
This is a completely rewritten version of Ashford Academy. Ashford Academy is a game where you...
Big Brother - Version 0.13.0.007 (Cracked+Mod) (FREE)
Main character - Max, young guy who is living in poor family with mother and two sisters....
© 2017-2021 AduGames.COM | Download adult games for FREE!