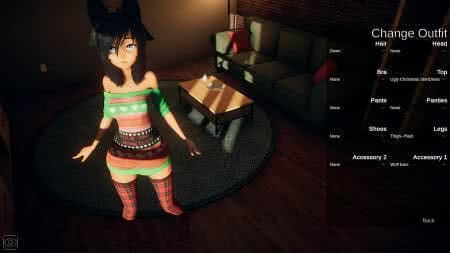 Naomi 3D is a sample animation to show our goals for "Our Apartment" the next game we'll make after The Couch finishes it's core release content. This game will be a sequel to The Couch, and offer a lot of the same features in more of a 3D format plus a lot more thanks to the benefits of 3D. But for now this project will only be short sex animations we'll release occasionally when releases for The Couch are slower. For now we just want to demonstrate what we can do and offer more public content! Keep in mind all assets and content here are work in progress or temporary. In the future there will be significant improvements to the visuals and content. Along with audio mixing.

17 different socks have been added with up to 4 variations each! There's also a new mildly animated "pose" scene for Naomi to show them off!
Ugly Christmas Sweater Shirt Dress!
Alternate Tiny Outfit Colors and Design
New Male Avatar Options! Multiple default dick sizes (Realish, Larger, Largest!)! Items coming from Overwhored by CypressZeta and odd dicks by artist Happy Otter! Be sure to check them out!
Sex Sim UI has been completely revamped to prepare for new features! And a new feature added, you can now cum outside (Yes particles and decals now implemented) and "grind" both before penetration and after. I'm not happy with the pre-penetration grind so I'll update that later. you'll also notice buttons for groping and alternate positions, the system is in place for these so it's coming soon! Might not work for cowgirl tho...
Sex Sim now has sound effects! Various sounds for pumping and voices from Naomi, they aren't lipsynced yet cause i haven't determined what method i want to use for that. Both sex sounds and moans will change depending on the speed and arousal level of Naomi! More factors will come soon too!
SexSim now triggers a different Music playlist, currently there's 3 songs (you've heard before in The Couch) that will play randomly!
Volume controls! While it's a bit iffy, volume settings are here! Currently Master does not control music volume, this will be fixed later.
Added wolf ears and wolf tail to more slots so that you can customize easier, I haven't tested this much so please avoid using them in multiple slots cause I doubt the system is prepared for that...
Optional "Face Light" added to help with lighting in some scenes.
Modified missionary scene has some animations split up a bit more into loops, so now the kissing after pull out has a loop. I plan to add proper dialogue for this scene soon!
All animations are now fixed! I've also fixed up some of the jankiness in the Three Weeks dialogue, I still have some more fixes to make tho. Poses are not all fixed tho, i'll return to those soon as I'd like to give them small animation loops rather than have them be static.
Overall UI revamp! I've completely changed the way UI is handled using a system that lets me deal with it without code. It also means I can add little UI transition animations! There's also a title screen now, it's mostly place holder. On top of this UI is now static pixel resolution meaning it's smaller on higher resolutions, there is a resolution scale slider though!
Uh...probably a bunch of stuff i'm forgetting...fixes and stuff? Aaaaaaaaa... I dunno.

I am sorry because of all the other fixes and changes i didn't have time to add the doggy style animations yet but they're up next!

There's likely many issues in this build but thankfully a tester sunblaze helped me find some solid ones! I couldn't fix them all tho...

Naomi 3D is a sample animation to show our goals for "Our Apartment" the next game we'll make after The Couch finishes it's core release content. This game will be a sequel to The Couch, and offer a lot of the same features in more of a 3D format plus a lot more thanks to the benefits of 3D. But for now this project will only be short sex animations we'll release occasionally when releases for The Couch are slower...
-1
2020-02-07 0 2 478
2D and 3D Games
Unity 3D Game Animated Male protagonist Vaginal sex Creampie Monster girl
Comments:
Post your comment here! Be the first one!
Related Games 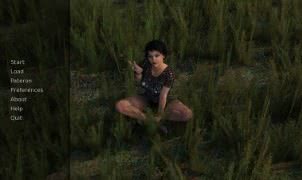 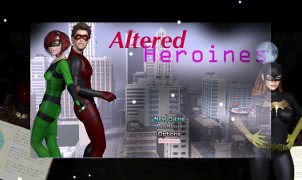 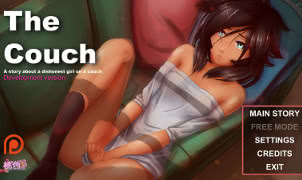