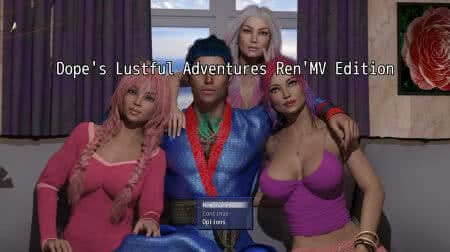 About game
Lust. It can consume you, devouring your soul as it corrupts you and those around you. Leading you on a journey of debauchery and immorality so perverse that "lust" has been labeled one of the seven deadly "sins." But what is lust? Is it really that bad? Are the other six "sins" truly so bad as well? Find out as you take control of Dope as he becomes the champion of lust, where he is thrust into a plot in which the survival of the human species rests with his sack.
Changelog
Add labels (names) to accessible areas on the map.
Expand the basic interactive map feature to open maps without it. (The placeholder
text is wrong but the events work properly.
Jessica's Photoshoot. (It has some extra options that don't have renders but the event works as originally intended.)
Elise/Party Event. I wouldn't quite call it an overhaul but the event has been updated/expanded to reflect my original intent. You can build relationship with numerous characters and multiple questlines have starts here. If you miss these quests it's ok, they can be started later, but there will be benefits to starting the quests now. If you get all the quests, by the end of the update you should have 6. (1 main quest 5 side quests)
Add time/stamina modifiers to map distances. (Each area of the map is a "zone". For example, everything in Hightown is in zone 1. Traveling within a zone takes 1 minute/stamina going from map to map. However, traveling from zone to zone can take up to 30 mins/stamina, or more.)
Move the character log from the phone(VS plugin) to the Codex(CGMZ plugin). This is only partially done, but in the future the "Phone" will only show some generic info about a character as well as their relationship stats. The character log will have that as well, plus more detailed information about characters that will update as the game progresses. You'll also be able to view this same information in the bio portion of the status screen, however, only in party characters will show there.
Other shit that I can't remember.
Download links
You can download games from keep2share, fboom or uploaded using links below. If you want to use MEGA, Google drive or Workupload, you need to be in AduGames friends user group. About this read in FAQ here https://adugames.com/faq.html

Comments 0
Add comment
Information
Users of Guests are not allowed to comment this publication.
Best games
Milfy City - Version 0.71b + compressed
A young student finds himself in the school therapist office, after a humiliating moment with...
Grandma's House - Version 0.09 + compressed
MC comes home from college and has lots of sex. Your standard cookie-cutter incest game with...
Summertime Saga - Version 0.20.14 Pre-tech - Part 4
After his father died leaving his mother, sister and him behind, their father's death though...
City of Broken Dreamers - Version 1.11.0 - Chapter 11 + compressed
Los Angeles, 2042. A city ruled by corporations. A city ruled by the elite. A city that...
Glamour - Version 0.49
Main character (a guy or a girl, your choice) from a small town turns 18 and it's time to go...
The Secret Reloaded - Version 0.4.9b + compressed
Moving means troubles, worries and lots of wasted money and nerves. But not with Mary. When my...
Latest comics
This Romantic World
Comic takes place in a reality where the movement of free love never ended. Sex is now casual...
The Avengers
Female members of The Avengers attempt to defeat Thanos, but it's hard to fuck someone into...
The Wayfare Horror
A story of lesbian incest and horror. Welcome to the Wayfare!...
John North collection
John North porn comics and pinup collection....
Our New Best Friend
A kinky transfer student is welcomed to her new school by a trio of dykes....
Completed games
Date Night
...
Abyss - Completed
...
Beach Vacation - Completed
...
The Lake House - Part 1 Extra (free)
...
Fight For Fuck - Version 2.1.1
Love, lust, Pride. Everyone has a reason to fight. There are no wrong motivations, just the...
Jennifer - Completed
...
© 2017-2022 AduGames.COM | Download adult games for FREE!