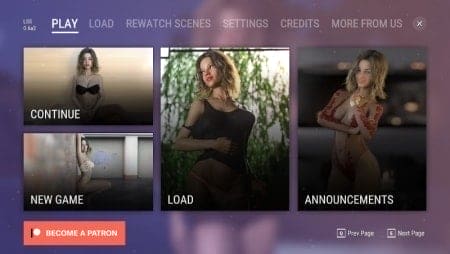 You will be playing as a guy, who’s never really clicked with girls too much. You’d much rather spend your time on the computer than dealing with real-life relationships. However, It’ll all quickly start to change shortly after diving into the story. Your best friend, Joe, has made a significant change in his life, and he is there to pull you out of your comfort zone into a new lifestyle. Vanessa, Joe’s girlfriend, and Ann, her shy friend, are just two of the girls you’ll encounter early on in the story. Are you going to build a relationship with sweet, shy, Ann? Maybe you’d corrupt her instead? Heck, why not try to steal Vanessa away from Joe?

Changelog
Bug fixes
Overwriting existing saves will now update the date.
The underpass scene will now correctly trigger (previously skipped) on Vanessa + Ann corruption route.
Changes
Rerendered Vanessa/Mario and Customer/Vanessa coffee shop scenes - I and others realized she sometimes looks strange and ugly, so I've decided to rework those scenes (only visual change).
Proofread and dialogs changes by scooter the king!
If you corrupt Ann on Vanessa's route, Vanessa will show up in the morning (V0.7), and then the photoshoot scene with Ann will happen.
Improved the performance of the save/load screen - it should now show saved images instantly when flipping through pages.
Can now hide the UI with the middle mouse button. (Was requested)
Added an option to open the images folder (accessing the menu by pressing the ALT key)
Changelogs that were posted in the beta
Added all routes except Joe's rival - it will be added in the next update.
You are now able to corrupt Ann on Vanessa's path.
Corrupting Ann is more clear now, and can be determined by a simple question at Joey's birthday.
Changed some of Ann's dialog on her corruption path so it will "feel" like it has more progression.
The game is now centered both horizontally and vertically and will look better on screens that are not 16/9.
Added a trash icon to delete saves. (The feature was requested on Discord).
Added shake effect.
Fixes
Fixed a bug where the right arrow of the phone sometimes appeared on top of the menu.
Joe's rival scene with Ann was triggered for Ann's hate route when it should've been only for the Love route.
Rolling back after a transition image will skip the fade effect.
Animations will now start from the beginning when rolling back and forth.
Optimizations and minor bug fixes.
Download links
You can download games from keep2share, fboom or uploaded using links below. If you want to use MEGA, Google drive or Workupload, you need to be in AduGames friends user group. About this read in FAQ here https://adugames.com/faq.html