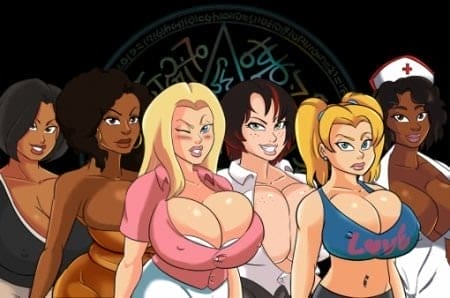 Urban Demons: Take control of 2 characters, one male, one female, who both have near death experiences in this rpg maker game. However it wasn't a divine miracle that saved them from an early grave, no it was something much more sinister. Now with seemingly new powers, they set out to fulfill their goals of domination. For the male simple domination of the women he lusts over, but for the female domination over her surroundings and eventually revenge upon the bitch who put her in this situation.

IMPORTANT Keys Help:
Q - switch character (when available)/ wake up (when available)
W - Open up phone menu (normal menu is disabled - but can only access when you have phone)
A - Open Item menu - can use items on NPCs/objects
S - Toggle sprint
Shift - Skip dialogue

Changelog
END GAME!
Players can now progress to the end of the game!
The Underworld is now fully traversable! (There's quite a few areas)
There's 5 different endings (one very bad, one bad, three good - a different scene for each ending)
The credits will roll, but you will return back to the game, able to continue and play on your save as normal
A new introduction has been added too
Kaylee's progression re-added to the game
Hope you like it!
Brigette X Sydney Threesome
You need them them both at level 4
Talk to Brigette at night to begin the story line
Sex Shop Investment added
Now on the map (bottom half)
Can invest into it, able to get lingerie for Brigette, Sydney, Mrs Jennings, Ms Amos, Neala and Kimberly
New homes for Ms Amos and Mrs Jennings storyline
You need to have completed the game and reached level 5 with them both
Talking to them (like long progression) will trigger the start of this
Major sound improvements
Lots of sound effects added back into the scenes that were missing before
X-Ray power added
You activate it via the Q menu
Minor X-Ray shows underwear busts (for those that have it)
It also shows lingerie busts if you've bought them the outfit
Major X-Ray shows nude busts (you can pick which one you want to activate)
Lots of bug fixes
Mainly focused around missing scenes and such

Comments 4
Add comment
Information
Users of Guests are not allowed to comment this publication.
Best games
My New Life - Version 2.1 + Extras Jack's Life
You will assume the role of a young person in your city where you live the hottest situations....
Melody - Version 1.00 Extras
You play a session musician who has had a busy lifestyle, having worked in various cities and...
Dreams of Desire - Episode 12 Version 1.0.3
You play as the middle sibling of a family living together with Mom, an older and a younger...
The Tyrant - Version 0.9.1 + compressed
The game will about the son who returns from his year as an exchange student. It was his last...
Wild Life - Build 2020.05.29
We live in a mad universe... indescribably vast... full of wonders... and terrors. And amidst...
Big Brother - Version 0.13.0.007 (Cracked+Mod) (FREE)
Main character - Max, young guy who is living in poor family with mother and two sisters....
Latest comics
Emotion Sickness
Ongoing porno parody comics about Teen Titans and their sex adventures....
S.EXpedition
Really long comics about space adventures, crazy sex with monster girls and even some plot...
Asschucks - Part 1
Crazy incest comics from Milftoon. Completed part 1....
The Legend of the White Ape and the Snake 1-2
Sexy adventures of Tarzan and Jane Porter with lots of sex! Part 1 and 2 included....
The Incestibles
Porno parody comics about Helen Parr (Elastigirl) and Violet Parr. Lots of lesbian sex and...
Superheroes collection
Hot collection of adult parody comics with popular DC and Marvel superheroes! Lots of...
Completed games
Incest Story 1-2 Unofficial Ren'py Remake
This is a fan remake of Incest Story & Incest Story 2 in Ren'Py....
Beauty Bounce - Version 1.0 Completed
...
2Bae - Completed
...
Desecration Of Wings
...
I Love Daddy - Version 1.0 + Walkthrough
...
Unexpected Adventures - Completed
Catching some tail on an airplane, a sweet BJ from a female prison guard, your skeleton buddy...
© 2017-2020 AduGames.COM | Download adult games for FREE!