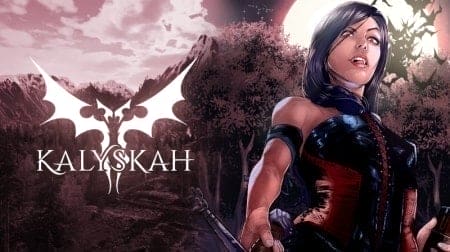 About game
Kalyskah is an Adult Action-Adventure Role-Playing Game where you control Kalyskah Karnstein, a noble lady of a long-dead vampire family who wakes up after thousands of years of slumber. What awaits upon her awakening is a world that has changed for the worse. It is up to you, the player, to help our heroine (or anti-heroine, if that is your choice) fight back the chaos and confusion of her lost of time and find out what happened to the world in the years that have passed. The game features an immersive combat system with RPG Elements, an open world where you can find quests with multiple endings and occasional interactive sex scenes for those who play their cards right.
Changelog
Fixed Kayskah walking backwards in several situations like after trying to pass through doors that she wasn’t invited in yet
Both Kalyskah and the NPCs will no longer rotate after receiving damage. (NO MORE CLUMSY FIGHTS!)
Fixed typo on Merishya’s key
Fixed typo on a choice on the dialogues with James
Fixed typo on pet collar tag description
Fixed exposed breasts and privates tag: Removing the chest or leg piece of clothes should give those tags to Kalyskah, as originally intended.
Fixed several situations where the characters would have a strange rotation while performing some actions
Fixed targeting enemies during dialogues and after death
NPCs should reset mesh to the default location after they defeat Kalyskah. This will fix a bug that sometimes their hitboxes were in a different place than where you were actually seeing the character.
Fixed weird rotation and character placement during sex animations
Fixed the logic we use to dress NPCs, which will fix the fact that they were never removing their belts during the sex scenes.
Fixed Estoc description and weapon scaling. Now, this weapon should scale with Charisma, Dexterity and Strength, as originally intended.
Fixed camera focus on several places of the intro cutscene
NPCs should no longer highlight during dialogues
Fixed Merishya’s highlight so instead of only highlighting her body, she will now have the highlight effect on her armour and hair as well.
NPC will stop targeting player after Kaly dies
Hexblade female clothes are purple again
Humanoid NPCs should dissolve properly when they die. Before they were dissolving the body but the armour and weapons were remaining the same until they disappeared.
Fixed cutscene with the Seekers and James not being triggered at the open world.
Fixed the rare female seeker chest textures (if you saw this bug it’s because you are lucky, there’s a really low chance of this chest piece to drop from the full armoured seeker Kalysakh fights while rescuing James)
Combat sound should no longer play after you defeat Gremmnoch.
Once you make the Safe Haven quest, Merishya should be leaning against the balcony, as originally intended.
Forced Merishya to follow Kalyskah after the intro cutscene at the open world is done.
Fixed stamina consumption on several neutral poses that the player could use when they chose to “take a break” during sex scenes.
Fixed an issue that was making allied NPCs not being properly stunned when they got hit. Merishya should now spin and roll around if she’s hit by the heaviest attack of the boss, just like it happens to Kalyskah.
Fixed guard and innkeeper’s working animations.
You can no longer talk with Merishya during boss battle.
Fixed interaction with Averion so player can only speak to him after defeating the bandits
Roaming NPCs should no longer rotate while you talk with them
Averion should be reenabled after cutscene is done
Fixed “Estimulate” to “Stimulate” typo on lesbian sex animations.
Fixed Kalyskah staying in mist form while talking with NPCs
Enhancements
Improvements on a few armours and objects materials
Removed the necessity of "hearts" on the negotiation system with acolytes. That mechanic was only making players confused.
Increased the distance Kalyskah can bite enemies by 1 meter, while the distance she can bite normal NPCs through the world was not changed (So you won’t bite people by accident)
The day will turn to night while Kalyskah waits to transform James, which will make the line where he asks “Why is the night so much brighter?” makes more sense.
The rope that James uses to climb down to Kalyskah’s temple on the intro cutscene should be thinner
Telekinesis should feel way much more satisfying now:
-Kalyskah can push barrels and other objects with physics
-Enemies will fall down for a moment if they get pushed
-Enemies that were pushed or pulled will now have slight dark energy around them so the player can see that the power worked.
-Stamina stops regenerating while using telekinesis (so now you can actually run out of stamina if you just keep bouncing enemies around)
The skeleton pierced by the flamberge at the dungeon, should now fall down once you get the weapon out of it.


Improved readability of the UI:
-Health is now shown in green
-Blood points actually say how much blood do you have in real-time, and the words get red if Kalyskah is visibly thirsty (Which changes some dialogue lines like the one with Jessie or when you are bringing the pelts back to Fara)
-Reduced the size o the blood dots (each dot means 100 blood points, I think it will be easier to understand what they mean once you see the new UI)
Kalyskah will now use stamina to sprint unless she has the blood buff active, which will drain her blood points instead of stamina. Kalyskah runs with a different animation if she has the blood buff active.
Improved Blood Buff: It will no longer drain your blood points unless you are using something that requires it, like healing or running as described above. You should be able to hear that heart beating sound when your blood is being drained
Reduced the speed every NPC recovers stamina
Humanoid enemies should have less health and stamina
Hexblades now use their stamina when they throw the dark projectiles on Kalyskah
Parrying attacks should reduce enemies stamina to 0 for 3 seconds
Locking on a target should close both your inventory and character screen.
Removed elevators on the starting dungeon (the elevators will be back, but in different dungeons, once we explain why do they exist).
Added two more bandit spawn points in the world world
Merishya now has her own voice when she’s fighting.
Features
Added a link to our patreon on the main menu, so people who get the game through itch or other websites without seeing the post here will know how to help us to keep developing the game =)
Download links
You can download games from keep2share, fboom or uploaded using links below. If you want to use MEGA, Google drive or Workupload, you need to be in AduGames friends user group. About this read in FAQ here https://adugames.com/faq.html

Comments 1
Add comment
Information
Users of Guests are not allowed to comment this publication.
Best games
City of Broken Dreamers - Version 1.08.1 - Chapter 8 + compressed
Los Angeles, 2042. A city ruled by corporations. A city ruled by the elite. A city that...
Good Girl Gone Bad - Version 1.2 (Nat DLC)
You play Ashley and make choices that will affect her story in a meaningful way. Are you a...
Dreams of Desire - Episode 12 Version 1.0.3
You play as the middle sibling of a family living together with Mom, an older and a younger...
View of Family - Version 0.1.4
"View of family" is a pov, rpg game with some kind of open world... in perspective....
SuperPowered - Version 0.42.00 + compressed
In the game, you play as Billy, a young man still living with his mom. At the very beginning...
Research into Corruption - Version 0.6.5 Fixed
This is a Modded RPG Maker Game to simulate a type of Visual Novel Exploration Corruption...
Latest comics
S.EXpedition
Really long comics about space adventures, crazy sex with monster girls and even some plot...
The Cummoner - Chapter 1 - 22
Comic series about the magical and erotic adventures of young sorceress Vilga and her various...
The Rock Cocks
Are you ready to rock… with your cocks?!...
The Inner Joke
The Joker is raping and corrupting all the heroines of Gotham City, and even the Batman seems...
2 GIRLS AND PRINCE (The Dragon Prince)
The dark sorceress, Claudia, has been coped up in a cave for months and needs to let off some...
Completed games
Yuuki's Party Night - Version 1.02
A short fun visual novel, following Yuuki as she goes on her first night out for a long time,...
Making Movies - Version 0.9.15
After a messy divorce that's left you broke and unemployed you decide to start a new life...
Beach Vacation - Completed
...
Apartment - Version 0.4 [Abandoned]
...
KAME PARADISE
...
Luxuria - Version 1.1
Hello, my name is Kain and that's my story. I am a high school student. I live alone....
© 2017-2020 AduGames.COM | Download adult games for FREE!