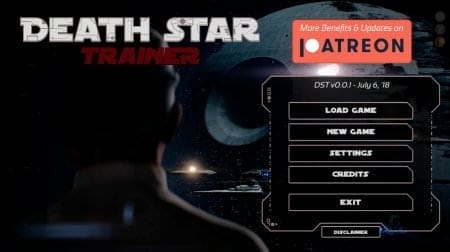 DSTrainer is the slutty daughter of “Something Unlimited” and “Akabur” after they did a Double-P to “Star Wars”. You will play as Vader. Your main goal is to capture and pervert all the Iconic Girls in the Galaxy. Just put them into a cell, and break them slowly with words, gifts, teases and by force until they’re willing to obey you. But be aware, after the rebellion destroyed the last Death Star, the Empire is low on resources! So you will also have to put those girls to work. They can perform in the Cantina or the Empereor's Bordello. Use those earnings to capture more girls, hire bounty hunters, upgrade your space station, and finally defeat those rebel scums! The game has 14 unique Star Girls, and you Gotta Catch ’Em All!

2 New Minigames on Cantina:
Death Star Defender: New minigame that you can play and get bet your money. Depending on your skill, you will earn more!
Force Duel: It's still under development (Test-Phase), and because of that right now it's only a 2-player game. However, when I create the proper IA, you'll be able to play against the machine and bet money.

Coregame Improvements & BugFixes:
As usual, with every update I try to polish my old coding and fix any issue that may have appeared because of the new areas and features that I've added.

Comments 6
Add comment
Информация
Посетители, находящиеся в группе Guests, не могут оставлять комментарии к данной публикации.
Best games
Big Brother - Version 0.13.0.007 (Cracked+Mod) (FREE)
Main character - Max, young guy who is living in poor family with mother and two sisters....
A Wife And Mother - Version 0.150 + compressed
My game is a choice-based VN, where you take the role of Sophia Parker, a happily married...
Freeloading Family - Version 0.30 GU + compressed
Freeloading Family is a adult 3D game about a man living alone with his step-sister while...
Wild Life - Build 22.12.2021 Patreon
We live in a mad universe... indescribably vast... full of wonders... and terrors. And amidst...
Treasure of Nadia - Version 1.0112
Treasure of Nadia is the followup to Lust Epidemic. In Treasure of Nadia you take control of a...
Milfy City - Version 0.71b + compressed
A young student finds himself in the school therapist office, after a humiliating moment with...
Latest comics
Mercenary Breeder
Ongoing fantasy comic....
This Romantic World
Comic takes place in a reality where the movement of free love never ended. Sex is now casual...
Mark of the Wild
World of Warcraft porno comics!...
Peach Sex Odyssey
The princess wants to experience new sensations, but will Mario help her or hinder her?...
After Avatar (The Last Airbender)
Hi, im Emma Brave and I draw NSFW cartoons and comics! If you want to keep up to date with the...
Completed games
West Sweety - Final
Welcome to the bar in the wild west, in this game, you roled a cowboy, use bullets & the...
Wicked Choices - 1.0 Completed
...
Apartment - Version 0.4 [Abandoned]
...
Life with Mary - Version 1.0.2 Completed
Guy lives a life with few worries, till his best friend asks to allow his daughter to live...
Misteries of the Burroughs Manor
The team of old "Mystery Corporation" comes to the family manor, where the ghost terrorizes...
Fashion Business - Episode 1
...
© 2017-2022 AduGames.COM | Download adult games for FREE!