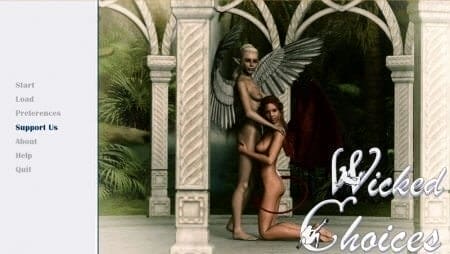 About game
Each month, in our game: “Wicked Choices”, you will play one of the TWO major characters that you will control... the first is MICHAEL PRESTON (or the name of your choosing), the true Main Character that chronicles the events that unfolds (and that you, as the players, decide) as he is introduced and thrown into a world seeped in lies, deceit, incest, corruption, humiliation and all manners of dark desires. Married into a wealthy family that carries a dark secret and heavy burden, Michael Preston will learn that he has the destiny of being the ‘Antichrist’... the one fated to unleash onto mankind the demons that have long been kept imprisoned. Enter PRINCESS LYNARA, a young angel, wanted by her own kind for the truth she holds and who’s destiny is to find and meet the ‘Antichrist’; will she try to stop him… or will she allow herself to be corrupted and help aid him in his destiny?

As the story progresses, you will be introduced to more and more characters that you will be able to interact with, experience, build relationships with and sometimes be able to control as the story moves more and more to its conclusion… Which ‘Wicked Choice’ will you make? Which side will you choose to stand with? Or… will you create a new path that no one could foresee. Only you, the player, can choose the fate and outcome of these character’s destinies, as the ripples of your choices affect all those around them!

FINAL RELEASE!!
NEW PLAYTHROUGH REQUIRED for Universal Game Save to work in our next games!!!
Spelling and Grammar fixes
1 Missing Scene added
Continuity Storyline Fixes
Final Programming Fixes
Final State to the Universal Game Save for import into next Games to remember your choices from "Wicked Choices: Book One" to continue your story.
Final Walkthrough Included
Download links
Warning! You are not allowed to view this text.

Comments 2
Information
Users of Guests are not allowed to comment this publication.
Best games
Amnesia - Version 0.90c
A man wakes up from a coma with amnesia. Can he recover his memories and reconnect with his...
Indecent Desires - The Game - Version 0.21
Desperate and focused on finishing University, our hero has no option but to move to another...
Wild Life - Patreon Build 21.10.2022
We live in a mad universe... indescribably vast... full of wonders... and terrors. And amidst...
The Tyrant - Version 0.9.4 + compressed
The game will about the son who returns from his year as an exchange student. It was his last...
Sunshine Love - Chapter 2 - Version 0.04i Extras
You are an aspiring junior associate at a prestigious law firm, with hopes of one day becoming...
Thirsty for My Guest - Season 3 (Episodes 23 SE)
When you met Vicki all those years ago, you had great fun together. She already had a young...
Latest comics
This Romantic World
Comic takes place in a reality where the movement of free love never ended. Sex is now casual...
The Avengers
Female members of The Avengers attempt to defeat Thanos, but it's hard to fuck someone into...
The Wayfare Horror
A story of lesbian incest and horror. Welcome to the Wayfare!...
John North collection
John North porn comics and pinup collection....
Our New Best Friend
A kinky transfer student is welcomed to her new school by a trio of dykes....
Completed games
Pure Heart Chronicles Vol. 1
Pure Heart Chronicles is an epic fantasy visual novel, with 4 main female characters, who will...
Poolside Adventure – Version 0.7 – Part 1 Full Version
...
Molly and Marianna - Final
Molly and Marianna by vDateGames​...
Aleistra
Aleistra was an orphan, raised by her grandfather, an over the hill magician. When she found...
Slimy Sextet
The hero Quinn has slain the demon king and brought peace to the world with the help of...
Twists of My Life - Version 1.01
"Twists of My Life" - is a visual novel where every decision you make can completely...
© 2017-2022 AduGames.COM | Download adult games for FREE!