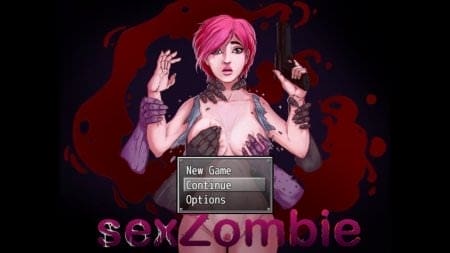 About Game
SEX ZOMBIE is a survival horror game set in a post-apocalyptic modern world, made using the RPGMaker MV engine but utilizing unique “retro”-style graphics. It is meant to be a sexualized parody of popular survival horror games like Resident Evil and The Last Of Us – but being a parody doesn’t mean it compromises on the story in any way.
In this game, you take the role of Juno, a survivor of the apocalypse and a trained engineer (a shout-out to Isaac from Dead Space), trying to navigate between a failing human society cloistered in fortified sanctuaries and an outside world ravaged by the infection.
Changelog
PATCH CONTENT (0.07.2)

* Critical reload bug fixed.
* Removed fuel being mistakenly given when picking up the shotgun shells in the boat shed.
* Some 'stuck' zombie positions changed.

* Dangerzone now available; three distinct areas - Dangerzone Central, Dangerzone East, and Dangerzone South. North (primary storyline) is not yet available. East and South are sidequest areas. Within these larger areas you will find: Ration Distribution Center, Police HQ, Overrun Apartment Building, Old Warehouse, and Maintenance Shed.
* All enemies have been outfitted with smarter AI. They now only start pursuing Juno after she enters their field of vision. An alert sound and a balloon icon will pop up if Juno is sighted. Each enemy acts individually so alerting one does not mean alerting the entire horde. Walkers move randomly, Crawlers can 'sniff out' Juno and will move slowly towards her over time, and Hounds will only move in a limited area (their 'territory') and will only pursue Juno if she gets too near.
* New enemy type - the Runner - has been introduced, and comes with the attack CG already in place! Runners patrol areas that they would have frequented 'in life' (ie. Infected policemen are found patrolling checkpoints or traffic stops). They move the fastest out of all enemies, but quickly lose interest if Juno hides behind objects and will return to their 'patrol' positions.
* Gameover CGs have been added to the Walker and the Crawler. Text content has also been rewritten.
* New metallic-type windows/border.
* New weapons available: the Improved Pistol and the Rifle. The Improved Pistol is, as the name implies, an upgraded version of the regular Pistol that uses the same ammo to greater effect. The Rifle is a long-ranged weapon that can snipe enemies from afar, but has the rarest ammo type - use sparingly!
* All NPCs, enemies included, will stop moving when messages or other events are occurring. This is to prevent enemies being able to swarm the player after the first enemy has stopped the player in their tracks but the other enemies are still able to move and converge on player location.
* Custom music by Slaleky added and replacing all previous tracks.
* Enemy health has been updated and weapon specs have been accordingly adjusted. Hounds have 1 HP, Runners have 2 HP, Walkers are now 3 HP, and Crawlers have a beefy 4 HP. Pistol damage is 1, Improved Pistol damage is 2, Rifle is 3, and Shotgun is 5. All melee weapons have a damage value of 9.
* An "infection counter" is now visible in the top right (as well as on the menu, bottom left).

* Fixed a bug where the ammo count didn't update if you loaded from a previous save, and would show the incorrect count of the previous save until re-equipped or reload is used.
* No more firing/reloading sound when moving to new locations.
* No longer will you be able to keep spamming the struggle meter even when you've run out of time. Meter will also stop filling once maxed out.
* Juno no longer walks around with the pipe equipped visually even though nothing is actually equipped. Sprite will be unarmed until you equip something, should work flawlessly.
* All enemy positions had to be reshuffled as part of the new AI programming (that was a living hell, I tell you)
* Fixed critical error that stopped Missions from working as intended.
* Fixed the solo access point from Brookside Remnants into Brookside Safezone. Entire road now usable as access.
* Wrong/Old sprites being used in subway and hospital removed.
* Various bits of dialogue changed/corrected, too many to list individually.
* Fixed the Hospital Dossier showing up as Canned Food in pickup text.
* Donny's questline fixed up; you need to read the note first to tell him about Sarah.
* The Hounds in the Water Treatment Plant changed to Runners.
* Reward changed for Water Treatment Plant.
* Hounds no longer die from successful struggle.
* Some cosmetic/graphical bugs fixed up here and there, Prologue, mainly.
Download links
You can download games from keep2share, fboom or uploaded using links below. If you want to use MEGA, Google drive or Workupload, you need to be in AduGames friends user group. About this read in FAQ here https://adugames.com/faq.html

Comments 0
Add comment
Information
Users of Guests are not allowed to comment this publication.
Best games
Big Brother - Version 0.13.0.007 (Cracked+Mod) (FREE)
Main character - Max, young guy who is living in poor family with mother and two sisters....
F.I.L.F. - Version 0.13.3 + compressed
You the main character come home from a long time away. Greeted by your mom and sister you...
Freeloading Family - Version 0.30 GU + compressed
Freeloading Family is a adult 3D game about a man living alone with his step-sister while...
Good Girl Gone Bad - Version 1.2 (Nat DLC)
You play Ashley and make choices that will affect her story in a meaningful way. Are you a...
Man Of The House - Version 1.0.2c Extra
In this game you will play as a young adult, who is living together with his attractive...
The Twist - Version 0.46 Beta 1 Cracked
It's a choice-based dating sim/visual novel game. The game is real-time 3d (not rendered...
Latest comics
This Romantic World
Comic takes place in a reality where the movement of free love never ended. Sex is now casual...
The Poker Game 3 - Full House
Lexi is looking for answers to why she ended up fucking Herbie’s friends during the last 2...
S.EXpedition
Really long comics about space adventures, crazy sex with monster girls and even some plot...
Peach Sex Odyssey
The princess wants to experience new sensations, but will Mario help her or hinder her?...
Zombie
Small comics about horny zombies and sexy girls....
Completed games
PerfectLover - Version 1.21 + DLC
In PerfectLover, there are three girls for players to choose from: Reika, Saori, Shiori. They...
Shut Up and Dance - Halloween Special
"Shut Up and Dance" is a story about a guy whose life went wrong at one moment. A person that...
Lucky Mark - Version 18
This is a sandbox game in which you will play as a young programmer. You are moving to the...
The Prison - Version 1.01
You are a merchant and transport goods for the purpose of selling them in different cities....
My Girlfriend's Amnesia DLC - Version 1.0
...
The Mating Season - Version 1.03
Meet the newest game from Akabur, The Mating Season, with the characters from the Teenage...
© 2017-2021 AduGames.COM | Download adult games for FREE!