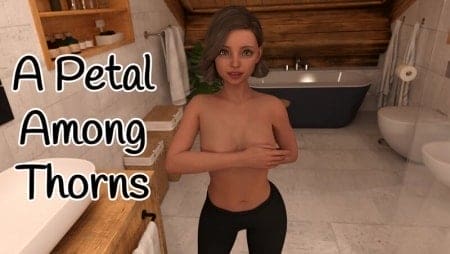 A Petal Among Thorns poses the question of whether you can indulge in the forbidden fruit without falling prey to the consequences of surrendering to something society considers to be taboo. You're a middle-aged man on a winter retreat with a young woman named Petal after your failed comedy tour. A relaxing vacation soon presents new feelings of lust towards your companion. As you slowly give into temptation, you begin to fear the repercussions that may come of this new relationship dynamic you're building with your friend. A Petal Among Thorns is a role-playing game where you get to choose the title of you and your friend. You'll be presented with choices that will alter your path throughout your experience.

Changelog
Hey fans!
I've got the final release of A Petal Among Thorns for download at the bottom of this post. I appreciate all of your support. It's only because of you guys that I could afford to dedicate all my time to these novels. Thank you!

In lieu of a progress report, I'm going to have this post here. I've started some of scaffolding of A Moment of Bliss. I've created two new characters, built the intro, and today I'm going to work on building the main house. There's a lot to do, but I'd love to have a release out at the end of April or beginning of May. I'll certainly keep you guys updated on the progress, and throw some screenshots your way as I have some.

I am going to try to manage some interactive elements in this sequel. There will be clickable objects in scenes and a phone mechanic. However, it won't be a sandbox. Petal will be a major character. So far there are four love interests. You'll get to know Rose and Bliss more intimately, and there's a fourth girl you'll meet outside of home.
Currently, the phone mechanic is planned to heavily involve Suzi. Suzi is the artificial intelligence that you would have met in Penny's game if you played it. If not, don't worry! I'll introduce you to her in A Moment of Bliss.
All this is concept. Any of these features and ideas can change depending on how progress ebbs and flows.

Please enjoy the final build of A Petal Among Thorns. Again, thank you all for your support.
Download links
Warning! You are not allowed to view this text.

Comments 1
Add comment
Information
Users of Guests are not allowed to comment this publication.
Best games
Big Brother - Version 0.13.0.007 (Cracked+Mod) (FREE)
Main character - Max, young guy who is living in poor family with mother and two sisters....
SuperPowered - Version 0.45.02 + compressed
In the game, you play as Billy, a young man still living with his mom. At the very beginning...
Grandma's House - Version 0.11 + compressed
MC comes home from college and has lots of sex. Your standard cookie-cutter incest game with...
Wild Life - Patreon Build 01.07.2022
We live in a mad universe... indescribably vast... full of wonders... and terrors. And amidst...
Summertime Saga - Version 0.20.14 Pre-tech - Part 4
After his father died leaving his mother, sister and him behind, their father's death though...
The Tyrant - Version 0.9.4 + compressed
The game will about the son who returns from his year as an exchange student. It was his last...
Latest comics
This Romantic World
Comic takes place in a reality where the movement of free love never ended. Sex is now casual...
The Avengers
Female members of The Avengers attempt to defeat Thanos, but it's hard to fuck someone into...
The Wayfare Horror
A story of lesbian incest and horror. Welcome to the Wayfare!...
John North collection
John North porn comics and pinup collection....
Our New Best Friend
A kinky transfer student is welcomed to her new school by a trio of dykes....
Completed games
Alternative Punishment - Version 1.0
As a result of a petty crime, the protagonist of this adult visual novel, is sentenced to...
Sex Bet - Episode 1 - Version 2.0
'Sex Bet Ep 1 - Raiser's Club' is a point-and-click adventure game with mouse-only mechanics....
Descent - Version 1.0
In "Descent", you take on the role of Christine Porter, a recent law school graduate...
Last lustful war - Version 1.0 Completed
This game completes the story of the confrontation between the guards and demonesses. The main...
Enjo Kosai - Version 1.0
"Enjo Kosai" is a short and straightfoward adult game with a focus on writing that...
Xmas Bonus - Version 1.0
...
© 2017-2022 AduGames.COM | Download adult games for FREE!