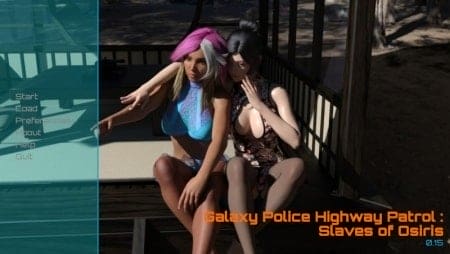 Name: Galaxy Police Highway Patrol: Slaves of OsirisGenre: Visual novel, 3DCG, Female protagonist, Adventure, Lesbian, Masturbation, Voyeurism, Interracial, Sci-FiVersion: 0.24aCensorship: NoAuthor: WoolfieLast updated: 25 May 2021Language: EnglishMade in: Ren'PySize: 411 MB 7Z / 477 MB UN7Z
About game
In the distant future, humanity has conquered the stars and settled throughout the galaxy under the leadership of the Emperor, a man who rules humanity from his palace on the moon. In this universe, a show is broadcast and no one, including the Emperor according to the rumors, misses for nothing in the world: In Bed with Miranda Khane.
Changelog
Setting up in the training camp
Option added : lesbian route only
Coding : first part of player object
Download links
Внимание! У Вас нет прав для просмотра скрытого текста.

Comments 0
Add comment
Информация
Посетители, находящиеся в группе Guests, не могут оставлять комментарии к данной публикации.
Best games
Dating my Daughter - Version 0.14.5 (free)
You’ll assume the role of a divorced father who hasn’t seen his daughter in years. Now that...
The Tyrant - Version 0.9.4 + compressed
The game will about the son who returns from his year as an exchange student. It was his last...
Lancaster Boarding House - Final
The game places you in a Boarding House somewhere in the US along with other young adults and...
Dreams of Desire - Version 1.0 Definitive Edition Elite Patreon
You play as the middle sibling of a family living together with Mom, an older and a younger...
My Cute Roommate - Version 1.6.1 Extra
Finally came the day where our protagonist graduated from high-school. Now it's time for him...
Dreams of Desire: The Lost Memories
A side-story starring Tracy that details the events of the main game from her perspective....
Latest comics
Mercenary Breeder
Ongoing fantasy comic....
This Romantic World
Comic takes place in a reality where the movement of free love never ended. Sex is now casual...
Mark of the Wild
World of Warcraft porno comics!...
Peach Sex Odyssey
The princess wants to experience new sensations, but will Mario help her or hinder her?...
After Avatar (The Last Airbender)
Hi, im Emma Brave and I draw NSFW cartoons and comics! If you want to keep up to date with the...
Completed games
Naomi's past - Version 1.0 Completed
A Visual Novel focused on the past of Naomi Yanagawa, a character from SoV and SoV 2.​...
GRAY - Version 1.0 Final
...
Happy Quest
Happy Quest is a casual match-3 game. You are a kind hunter in the town. Your quest is help...
Legal Today - PREMIUM
...
Chloe18 CamGirl
...
Katie’s Corruption - Version 1.19
I’m 3Diddly, and I create 3D comics and visual novel games! What I try to aim for is realism...
© 2017-2022 AduGames.COM | Download adult games for FREE!