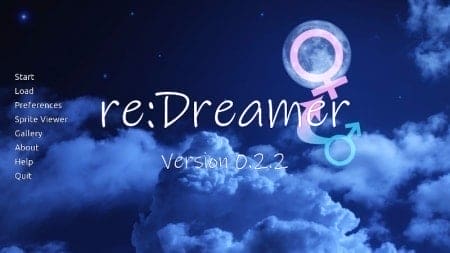 re:Dreamer is an adult gender bender visual novel about an impossible phone game that turns its user Zach into a girl before they even start the tutorial. With an impish and unreliable in-game A.I. as their only lead on how to change back, can Zach follow the rules of this insanely predatory game to survive, or will they lose everything that made them a man in the process?

Changelog
Britney has a few minutes of new content with the "Just ask her to come to your room." route where she outlines her terms for helping Zach hide his new body.
To prep for a sex scene between Britney and Zoey while the latter is being measured for clothes by the former, I redid Zoey's breast sizing on a hunch that they were wrong, and boy were they! She was listed as an 80F JP/32DD US with a 104 cm/41 in bust, but based on the sprites we have from TS, she's really an 80I JP/32K US with a 111 cm/44 in bust. That's big enough to make a thin girl's back explode without a bra. And speaking of which, Zoey now needs to go to a specialty store for her bra when she's that big, which will change the mall scene with Keisuke slightly.
Added Zoey's moaning and gasping SFX to some scenes that were missing them. If you don't like them, the fancier Voice Volume slider in the settings menu can be used to turn them off (as well as all other voice SFX and ambience, which are no longer tied to the Sound channel).
The CHEATS bars have been converted to sliders, and each stat shows you it numerical value (they're technically zero-indexed in-game but the five point scale of a traditional psychology survey question makes more sense in relation to user experience).
The GUI has been overhauled like crazy. In particular, the in-game GUI has been refurbished with a new font, a bigger stylized textbox that features on-the-fly opacity adjustment, a bigger namebox that changes based on the speaker, and text buttons for quick menu options (don't worry Android users, they scale to a larger thumb-friendly size on your phone screen).
The settings screen's sliders have been reworked to show you the current value (as well as the default, because there's nothing worse than changing a setting without realizing what it used to be).
A ton of the code for displaying things on screen has been optimized to be faster, with the exceptions of the in-game choice menus and exit screens, which have a bit of lag, likely due to bad predictive functions by Ren'Py. I'll get to optimizing them soon.
Apparently the History screen was broken for months and nobody noticed? Anyways it works now.
Android was apparently a complete mess for the longest time with bad text sizing variants and menus bleeding into each other. To make sure nothing breaks in the future, things have been standardized across all versions wherever it can still be read or clicked on a smaller phone screen.
Some SFX wouldn't loop properly while a fadein or fadeout effect was being applied, so everything has been forced to Tight looping.
Download links
You can download games from keep2share, fboom or uploaded using links below. If you want to use MEGA, Google drive or Workupload, you need to be in AduGames friends user group. About this read in FAQ here https://adugames.com/faq.html

Comments 0
Add comment
Information
Users of Guests are not allowed to comment this publication.
Best games
Acting Lessons - Version 1.0.2 Extras + compressed
The story centers around you, a middle-aged man with a background in cryptocurrency trading,...
A Wife And Mother - Version 0.115 + compressed
My game is a choice-based VN, where you take the role of Sophia Parker, a happily married...
Man Of The House - Version 1.0.2c Extra
In this game you will play as a young adult, who is living together with his attractive...
Glamour - Version 0.34
Main character (a guy or a girl, your choice) from a small town turns 18 and it's time to go...
The Tyrant - Version 0.9.1 + compressed
The game will about the son who returns from his year as an exchange student. It was his last...
Glassix - Version 0.57 + compressed
It's a trainer game as well where you play as a teenager who lives with his step-mom and...
Latest comics
The Poker Game 3 - Full House
Lexi is looking for answers to why she ended up fucking Herbie’s friends during the last 2...
The Cummoner - Chapter 1 - 22
Comic series about the magical and erotic adventures of young sorceress Vilga and her various...
This Romantic World
Comic takes place in a reality where the movement of free love never ended. Sex is now casual...
S.EXpedition
Really long comics about space adventures, crazy sex with monster girls and even some plot...
The Rock Cocks
Are you ready to rock… with your cocks?!...
Completed games
Bitch Raider - Version 1.01
You are Alicia, an notorious thief named Nightingale, and go to an imperial town called Kewade...
Monster of the Sea 2
...
Incubus: Path of Lilith - R3
You wake up in complete darkness but when have you ever gone to sleep? With no memories and no...
House Arrest - Version 2.0
Main Character Joel, a former criminal who is serving a prison sentence in his own home. Joel...
Katie’s Corruption - Version 1.19
I’m 3Diddly, and I create 3D comics and visual novel games! What I try to aim for is realism...
Landlord & the Tenants - Version 1.0
You're looking after your uncle's house when he's on his journey to travel around the world....
© 2017-2020 AduGames.COM | Download adult games for FREE!