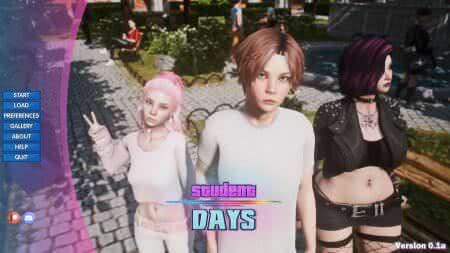 Version: 0.1a
Censorship: No
Author: DirtyNovels

About game
David (or your name) is an ordinary guy with a hard past and not much better present. He never saw his mother because she died in his childbirth. His father was constantly busy with his business, so various nannies with whom he could never find a common language were engaged in the upbringing of the protagonist.
Unfortunately at school, David also could not find friends. Constant fights and quarrels forced him to change schools in which he had to study, but somewhere around the age of 13 he met one girl who lived with them in the neighborhood.
From that moment, David's life began to change for the better. They spent a lot of time together and after a while became very good friends.
But unfortunately this could not last long. David's father needed to move to another city and he decided to take him to his sister for the duration of his absence. So David met his aunt Amanda, cousin Chris and two cousins Annie and Grace.
He had a great time with them and finally found more good friends. But a year later when his father returned he had to move home with him.
Returning, he notices that their neighbors have long moved and he realizes that he may never see his neighbor girlfriend even more.
Trying to find out where she could move, David is faced with the fact that no one except him remembers her existence and learns that no one has lived in house their neighborhood for more than 10 years. Disagreeing with everything that he hears about it, he headlong goes into books and studies.
After four years, he successfully graduates from a distance school and prepares to enter a rather prestigious college. The game begins at the very moment when David and his father go to his office. The further development of the plot will be influenced to some extent by your choices and actions in the game... Comments 0
Information
Users of Guests are not allowed to comment this publication.
Best games
A Wife And Mother - Part 1-2 - Version 0.175 + compressed
My game is a choice-based VN, where you take the role of Sophia Parker, a happily married...
Treasure of Nadia - Version 1.0117
Treasure of Nadia is the followup to Lust Epidemic. In Treasure of Nadia you take control of a...
Being A DIK - Season 3 - Episode 9
A young man, from a low-income family, moves away from his widowed father and his summer love...
F.I.L.F. - Version 0.17a Beta
You the main character come home from a long time away. Greeted by your mom and sister you...
Wild Life - Patreon Build 22.12.2022
We live in a mad universe... indescribably vast... full of wonders... and terrors. And amidst...
Summertime Saga - Version 0.20.16 Pre-tech
After his father died leaving his mother, sister and him behind, their father's death though...
Latest comics
This Romantic World
Comic takes place in a reality where the movement of free love never ended. Sex is now casual...
The Avengers
Female members of The Avengers attempt to defeat Thanos, but it's hard to fuck someone into...
The Wayfare Horror
A story of lesbian incest and horror. Welcome to the Wayfare!...
John North collection
John North porn comics and pinup collection....
Our New Best Friend
A kinky transfer student is welcomed to her new school by a trio of dykes....
Completed games
Memory's Dogma
...
Angel's Awakening
Angel's Awakening is an Interactive Erotic Story about the Sexual Awakening of a shy, reserved...
Tame it! - Version 1.1.2
The game is about Lee, who travels by plane to a hotel on one of a small distant Bahamian...
Sci-Fi Story - Final
Sci-Fi Story has slightly over 1 050 pictures and 104 animations, with 55 sex related. Using...
KYOKO to the MAX - Version 1.1.4
...
Lust Affect - Version 1.0 (reupload)
You will play as a clone of a certain Commander. Your goal as the Captain-in-Chief is quite...
© 2017-2022 AduGames.COM | Download adult games for FREE!