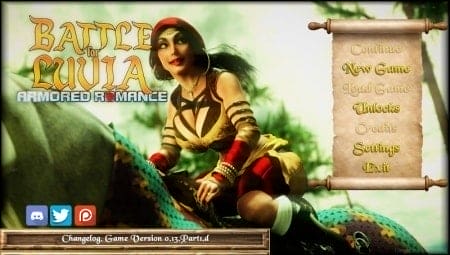 You play the role of Sir Patrik of Akros, a charismatic, handsome and middle aged (for the times) Knight that set by bonds of loyalty and family to the new Countess of Kathia, is bound to gather the fealty of the vassals of his liege, cajole with the outer counts, and overthrow the Duke of Luvia. It will not be only a path of conflict, choices of whom to trust and whom to make a head short, but will let the player enjoy the power fantasy of the Middle Ages, using the lesser and being used by the higher, both for power and for pleasure. In your treacherous journey among medieval politics, nothing will stop you from romancing and lay with any woman that is put in your way, for lust, love or political interest. Not only nothing stops you: Is part of your mission.

Changelog
Summary:
- More than one hour of gameplay.
-Around 1.700 lines of dialogue (for a total now of 11.000),
-More than 20 animations.
-New items and resources.
-Some really nice big moments!
Changelog 0.14 Patreon Release:
-Some Hartlepool resolutions wich contains:
-Full Diplopath to solve Rat Problems Quest, and rewards related to it.
-One of the ways of finishing Acallarian Ladykilller path.
-Penketh new interactions.
-Knightly Path Quest progression.
-Extra Hannah content on Akros Manor.
-Interactions with the new items and resources added everywhere.

-After finishing the update some things may look a bit on the air (same that happened with 0.13) waiting for the rest of resolutions that will come with 0.15, which will take around a month to code/finishing making some extra scenes.
General Fixes:
-Typos and general fixes (including performance)
-Some ways of passing night at hartlepool counting for numbers of days passed at Hartlepool (Usefull for some time based events)
-Canary Trail Sneak trip repeating in some old saves and not allowing progression to 0.14.
-Fixed a Robin Animation
-Fixed Penketh's Afinity menu not going away in some circumstances.

Things to expect on 0.15.
-Full Canary Trail Warpath and rewards related to it.
-All possible extra main story resolutions (Mercs, Belinda...)
-Hartlepool resolution Leffrin events.
-Remember cutscenes active on Hartlepool Fortress room for all scenes not available again due to paths taken.
-Meanwhile at Grassmere scene.
-Akros Manor Plus Ultra Quest Progression.
-Some Marzapan!
-Some Polled extra content.
-Everything will be ready to continue our travel in 0.20.

Known bugs on 0.14.c:
-For now none. There is a typo that doesn't show a variable in a conversation with the Meat Merchant, I'll fix that when I have to make a new release.

Known "story bugs":
-There is some story inconsistency if the player finish all the canary trial quest without doing some things first, like ending the current Belinda storyline (delivering package, Dolce etc), or if the player never visits the West Tower. I'll fix some workarounds for this in 0.15.
People that play every update won't find this problems, but someone can hit into them if playing blindly for the first time.

General troubleshooting if you have an old save where the sounds don't work:
-If you have a Save where sound and ambience doesn't sound (only music), opening the cutscene pause menu (during a cutscene) and closing it again for a moment fixing it.
I'm still searching for a definitive fix.
Have fun and stay safe!
Download links
You can download games from keep2share, fboom or uploaded using links below. If you want to use MEGA, Google drive or Workupload, you need to be in AduGames friends user group. About this read in FAQ here https://adugames.com/faq.html

Comments 0
Add comment
Information
Users of Guests are not allowed to comment this publication.
Best games
Being A DIK - Version 0.5.2 + compressed
A young man, from a low-income family, moves away from his widowed father and his summer love...
Milfy City - Version 0.6e
A young student finds himself in the school therapist office, after a humiliating moment with...
The Secret Reloaded - Version 0.4.1.4 + compressed
Moving means troubles, worries and lots of wasted money and nerves. But not with Mary. When my...
Melody - Version 1.00 Extras
You play a session musician who has had a busy lifestyle, having worked in various cities and...
Dating my Daughter - Version 0.21.5 Extras
You’ll assume the role of a divorced father who hasn’t seen his daughter in years. Now that...
Man Of The House - Version 1.0.2c Extra
In this game you will play as a young adult, who is living together with his attractive...
Latest comics
The Rock Cocks
Are you ready to rock… with your cocks?!...
Protectron Squad Alpha
A new interactive science fiction comic is on the horizon. Take part in voting polls starting...
The Cummoner - Chapter 1 - 22
Comic series about the magical and erotic adventures of young sorceress Vilga and her various...
Inquisition Slaves
Medieval sex adventures with tortures, group sex and witches......
The Inner Joke
The Joker is raping and corrupting all the heroines of Gotham City, and even the Batman seems...
Completed games
Crossing Borders - Part 1-2
You play as the main character - a guy 25 years old, who returned home after studying at the...
My Sister Mia - Version 1.0 Full
You the protagonist are a 18 year old that is about to finish high school. You live with your...
Pure Heart Chronicles Vol. 1
Pure Heart Chronicles is an epic fantasy visual novel, with 4 main female characters, who will...
Succulence - Version 2.4
You play as a strict female teacher, who finds a portal to a different world, and discovers a...
Wicked Choices - 1.0 Completed
...
Deep Space Waifu: FLAT JUSTICE
...
© 2017-2020 AduGames.COM | Download adult games for FREE!