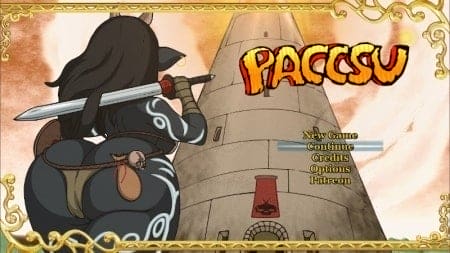 About game
"Paccsu - Namu's Journey is a LEWD RPG game set in a fantasy world called Paccsu. You take control of a Muh'kean girl called Namu, who was taken away from her birth parents at a young age to be a part of a holy ritual in Muh'kea'sdesperate attempt to fight The Undying King, the King of Zombies. She was taken to the Kingdom of Ruo'ho by a human refugee couple to live by the shadow of the mystical Tukeva Tower, where she would live her life, train and grow strong. 18 years later, Namu is ready for the adventure with the help of her adoptive parents. Namu has no idea what happened in her past or has any memory of it or what kind of power she holds inside her. Soon, Namu finds herself in the middle of a crisis that threatens the whole world. Namu's journey begins when she is sent to investigate the mines where dangerous and bootylicious snakes from the Clan Tiss'ihave been attacking the innocent human workers. It's Namu's job to save the world."
Changelog
New in Paccsu 0.9665!
Kulma'la Bath is finally open!
New Lewd Scene
Kulma'la Bath, Namu Wet Butt
Kulma'la Bath, ((GLORY)) HOLE (Animated) Twitter

New Areas:
Hero Manor (West Mainio)
Hero Manor is the Emperor's special gift to Namu and her friends. In Hero Manor you can enable NewGame+! In here you get all the future quests of the game.

New Game+!
In the Hero Manor you can enable New Game+! When you start a new game with this save, you get some new starting gear and bonuses:

1. Use the NG+ machine upstairs of the mansion
2. Choose a save slot, save
3. Go to Main Menu
4. Load the save you just saved
Here's the list of the stuff you'll (hopefully) find in your New Game+! NOT GONNA TELL WHERE...

Elite/Shadow/Undying Undead Sorceress Tentacle All The Way Through scene with Namu is now fixed with looping parts
Princess Fancy-Tail's bathing scene is now included in the gallery/Namu's memory room
Purnima sticking her behind in Elder's son's face is now included in the gallery/Namu's memory room
Updated the encounter with Maht'ava on top of the Kallo Tower with Namu's, Kiva's and Maht'avas cutscene pics
You can now enter the Cathedral in Mainio (joke event)
Slight changes made to the Status page(removed unnecessary information, made it a bit neater)
Added 3 pieces of art by Gross-Mind in the ending credits!
Removed that pool of purple goo behind the Kaupun'ki Inn so it won't damage player lmffao
Made some balancing changes to Thousand Cuts/Million Cuts and Purnima's Kunai Storm.
Buffed Arcanition (MP gain from 25% to 33% + 1% MP gain every turn for 3 turns)
Slightly lowered HP and damage of the Shark enemies. Decreased their Thunder and Ice resistances.
Purnima learns Meditation at level 30(with Throat Cut)
Purnima can now equip large shields
Increased Purnima's overall Agility and Attack
Increased Damage of Viper's Fangs (Purnima)
Slightly Increased Damage of Backstab (Purnima)
Shredding Claws lasts now 4 turns instead of 3 (Purnima)
Namu's outfits now have small bonuses
Bug Fix:

Removed the "here ends 0.92" message lmao
The outfits will now appear in the cutscene with the Snake Guard (Forgotten Temple Entrance)
Vhetae Witchy's Special Attack will now appear in the gallery once you have witnessed it NOW FOR REAL
Talking to Lehava Skinny-Tail in Mainio now displays all Namu's costumes while talking to her
Protective Slimebubble can't be dodged with Magic Evasion anymore (Kiva)
Save Included:

Slot 20 (Hall to Undying King's Throne Room)
Download links
You can download games from keep2share, fboom or uploaded using links below. If you want to use MEGA, Google drive or Workupload, you need to be in AduGames friends user group. About this read in FAQ here https://adugames.com/faq.html

Comments 2
Add comment
Information
Users of Guests are not allowed to comment this publication.
Best games
Freeloading Family - Version 0.30 GU + compressed
Freeloading Family is a adult 3D game about a man living alone with his step-sister while...
Big Brother - Version 0.13.0.007 (Cracked+Mod) (FREE)
Main character - Max, young guy who is living in poor family with mother and two sisters....
The Twist - Version 0.46 Beta 1 Cracked
It's a choice-based dating sim/visual novel game. The game is real-time 3d (not rendered...
Melody - Version 1.00 Extras
You play a session musician who has had a busy lifestyle, having worked in various cities and...
Wild Life - Build 31.08.2021 Patreon
We live in a mad universe... indescribably vast... full of wonders... and terrors. And amidst...
The Secret Reloaded - Version 0.4.3a Christmas Edition + compressed
Moving means troubles, worries and lots of wasted money and nerves. But not with Mary. When my...
Latest comics
This Romantic World
Comic takes place in a reality where the movement of free love never ended. Sex is now casual...
The Poker Game 3 - Full House
Lexi is looking for answers to why she ended up fucking Herbie’s friends during the last 2...
S.EXpedition
Really long comics about space adventures, crazy sex with monster girls and even some plot...
Peach Sex Odyssey
The princess wants to experience new sensations, but will Mario help her or hinder her?...
Zombie
Small comics about horny zombies and sexy girls....
Completed games
Enjo Kosai - Version 1.0
"Enjo Kosai" is a short and straightfoward adult game with a focus on writing that...
The Wilting Amaranth - Completed
...
Living with a Nympho
...
Ciri Trainer - Chapter 5 Version 1.0 (reupload)
In this game you'll be playing as Vesemir, Kaer Moher's elder witcher in charge of training...
Spicy Deck (free)
...
My Strange Sis - Version 1.0
...
© 2017-2021 AduGames.COM | Download adult games for FREE!