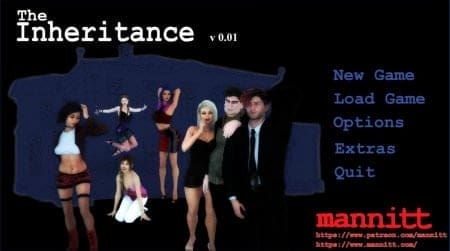 The MC (the name given by player) has been away from home over three years. Most of that at college. He returns home because of his father's death. He was never close to his father. Because his father was out of town for work most of the time while growing up. He was close to his two sisters, mom, and two best friends. While being away he lost touch with all of them. He now wants to reconnect with them and figure out why he stopped. Upon returning he is told that his father left him an inheritance. A large one. After receiving the inheritance, which didn't include his father's business, an accounting firm. He discovers how much personal wealth his father really had. While reconnecting with his family and friends he may get even closer to them then he was before. Establishing feelings and connections he hasn't felt before. He will also discover other things about his dad and mom's past he would never have imagined.

Comments 0
Add comment
Information
Users of Guests are not allowed to comment this publication.
Best games
Being A DIK - Version 0.5.2 + compressed
A young man, from a low-income family, moves away from his widowed father and his summer love...
House Party - Version 0.17.1 Alpha
The House Party game is similar to a lot of the browser-based games where your choices...
My Cute Roommate - Version 1.6.1 Extra Final
Finally came the day where our protagonist graduated from high-school. Now it's time for...
Wild Life - Build 2020.05.29
We live in a mad universe... indescribably vast... full of wonders... and terrors. And amidst...
Good Girl Gone Bad - Version 1.2 (Nat DLC)
You play Ashley and make choices that will affect her story in a meaningful way. Are you a...
Lancaster Boarding House - Final version
The game places you in a Boarding House somewhere in the US along with other young adults and...
Latest comics
Deserter
Shot parody comics about sex adventures. She-Ra and the Princesses of Power....
S.EXpedition
Really long comics about space adventures, crazy sex with monster girls and even some plot...
Scrawled
My webcomic "Scrawled" has finally begun! I've been working out what I want...
Emotion Sickness
Ongoing porno parody comics about Teen Titans and their sex adventures....
Symbiote Queen - Part 1-3
Sexy parody comics series about Spider-man and Symbiote sex confrontation. Completed part 1-3...
Asschucks - Part 1 and 2
Crazy incest comics from Milftoon. Completed part 1....
Completed games
Cosplay Alien - Completed
...
Oakwood Academy of Spells and Sorcery
...
Spicy Deck (free)
...
Faulty Apprentice - Version 1.2.3
Take the role of an ordinary farm boy that left home seeking a glorious apprenticeship. You...
Twists of My Life - Version 1.01
"Twists of My Life" - is a visual novel where every decision you make can completely...
Enjo Kosai - Version 1.0
"Enjo Kosai" is a short and straightfoward adult game with a focus on writing that...
© 2017-2020 AduGames.COM | Download adult games for FREE!