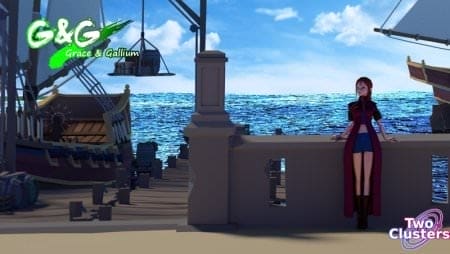 About game
This is a story about Grace and Gallium. Grace is a mercenary from Cizna Corlo mercenary guild and has been dispatched to a newly constructed village on Southern Alcella island on one year contract. Her job is to protect the village from constant ogre, goblin, and wild animals attacks while the village settles down and grows. The game begins after a night of a goblin attack on the village. Grace was able to repel them but there were casualties. The village chieftain calls Grace for a talk and informs her that he has hired another mercenary, Gallium. And so, the story of G&G begins.
Changelog
A scene between Grace and Gallium added after you finish the game. It has two variants: Front or back. They will play out differently.

Comments 0
Add comment
Information
Users of Guests are not allowed to comment this publication.
Best games
Treasure of Nadia - Version 56102
Treasure of Nadia is the followup to Lust Epidemic. In Treasure of Nadia you take control of a...
Melody - Version 1.00 Extras
You play a session musician who has had a busy lifestyle, having worked in various cities and...
Lancaster Boarding House - Final
The game places you in a Boarding House somewhere in the US along with other young adults and...
Milfy City - Version 0.6e
A young student finds himself in the school therapist office, after a humiliating moment with...
Acting Lessons - Version 1.0.2 Extras + compressed
The story centers around you, a middle-aged man with a background in cryptocurrency trading,...
Summertime Saga - Version 0.20.7
After his father died leaving his mother, sister and him behind, their father's death though...
Latest comics
The Rock Cocks
Are you ready to rock… with your cocks?!...
Protectron Squad Alpha
A new interactive science fiction comic is on the horizon. Take part in voting polls starting...
The Cummoner - Chapter 1 - 22
Comic series about the magical and erotic adventures of young sorceress Vilga and her various...
Inquisition Slaves
Medieval sex adventures with tortures, group sex and witches......
The Inner Joke
The Joker is raping and corrupting all the heroines of Gotham City, and even the Batman seems...
Completed games
The Night - Version 1.0
The Night - Monthly Mini Game Release. I'd like to introduce you to the 1st monthly mini game....
Lewd Stories of Trinity: First Valentine’s Day Date
...
Busta a Date - Version 1.00
You will play sexy, funny, dramatic, horror, fantasy and science fiction stories. You will...
Molly and Marianna - Final
Molly and Marianna by vDateGames​...
Legend of Fainn Dynasty - Completed
...
Water World - Version 1.0 + compressed
A group of college teen girls is sailing to an underwater research facility along with their...
© 2017-2020 AduGames.COM | Download adult games for FREE!