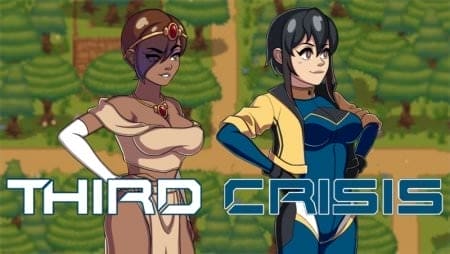 Third Crisis is an adult tactical-RPG that follows the adventurer and hero known as Vibe. After a mission gone wrong, she’s forced to adjust to her new way of life in the lust-ridden town of Carceburg. Whether she gives in to the bliss of submission or uses her sexual appeal to her advantage on the battlefield is all up to you! As you delve deeper into Carceburg’s mysteries, you’ll come to uncover the secrets surrounding the crisis that saw humanity defeated and enslaved by the sinister organization Peitho.

Changelog
-
Download links
You can download games from keep2share, fboom or uploaded using links below. If you want to use MEGA, Google drive or Workupload, you need to be in AduGames friends user group. About this read in FAQ here https://adugames.com/faq.html

Comments 2
Add comment
Information
Users of Guests are not allowed to comment this publication.
Best games
The Tyrant - Version 0.9.4 + compressed
The game will about the son who returns from his year as an exchange student. It was his last...
Lancaster Boarding House - Final
The game places you in a Boarding House somewhere in the US along with other young adults and...
Melody - Version 1.00 Extras
You play a session musician who has had a busy lifestyle, having worked in various cities and...
City of Broken Dreamers - Version 1.09 - Chapter 9 + compressed
Los Angeles, 2042. A city ruled by corporations. A city ruled by the elite. A city that...
Man Of The House - Version 1.0.2c Extra
In this game you will play as a young adult, who is living together with his attractive...
A Wife And Mother - Version 0.130 + compressed
My game is a choice-based VN, where you take the role of Sophia Parker, a happily married...
Latest comics
2 GIRLS AND PRINCE (The Dragon Prince)
The dark sorceress, Claudia, has been coped up in a cave for months and needs to let off some...
Star Wars: A Complete Guide to Wookie Sex 1-4
Star Wars sex parody with new and old heroes of the universe....
Daddy's Lil Hooker
Nightwing goes looking for Harley Quinn to get her help with a case he’s working on. The crazy...
This Romantic World
Comic takes place in a reality where the movement of free love never ended. Sex is now casual...
The Poker Game 3 - Full House
Lexi is looking for answers to why she ended up fucking Herbie’s friends during the last 2...
Completed games
Kiss Me One More Time
Kiss Me One More Time is VN Renpy mini game with 2 ending. The story is about a high school...
CODE: VALKYRIE
A third person shooter with an exhilarating shooting system, smooth movement, and high-quality...
KAME PARADISE
...
Game Over, Daisy
After conquering Sarasaland in the name of the Koopa King, you're tasked with making sure...
MsP & MsD
A young woman with her testosterone shot tricked one of her teachers into teaching her the...
Landlord & the Tenants - Version 1.0
You're looking after your uncle's house when he's on his journey to travel around the world....
© 2017-2021 AduGames.COM | Download adult games for FREE!