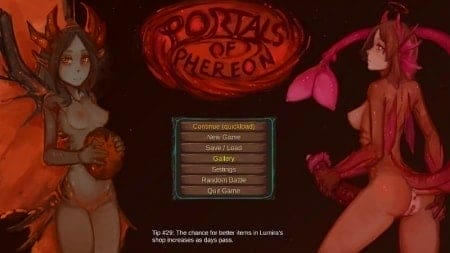 Portals of Phereon is an exploration/ management/ breeding / turnbased (on tilemaps) strategy game with Monstergirls. Maincharacter is currently a female(or futa) human (still not quite sure about that. Maybe she will be a unique species that cannot be found anywhere else, making hybrids between her and anything else also unique). There will be a lot of base species (currently only 7 (Centaur, Harpy, Angel, Succubus, Mermaid, Plant, Lavagirl)) and all possible combinations as hybrids as your characterpool to recruit from/ breed. Npcs will mostly be variants of those species or completely unique ones.

Changelog
Characters:
Each element now has a nymph evolution (4 new species)
Generally more evolution skill choices and more descriptive text
Most nymphs should provide a lot of synergy and flexibility to their element.
new skills
new special hybrid
2 new special species
new unique
Flora art update
Dating:
a lot more events/pictures
more cards/upgrade options
can only date each character once/day
most uniques have a small unique dating effect/passive
Overworld:
Full portals are now saved (savefile bigger based on current loaded portals. might cause loading of the save selection screen to take longer with many savefiles for now.)
Changing tiles affects daily changes/regrow things
separated building/terraform menu.
(foundation for more complex buildings with storage/ability to assign characters etc. in future)
some things can be build at higher range
Town:
some locations have an additional npc
some more special options and events
evo-show update
in shows, guests now leave when satisfaction stays at 100 or 0 for 2 turns
time cost for show-actions and duration halved. (ranks increase max time)
Removed the nearby location buttons
Removed some library tabs and updated info.
Start:
Added loadouts for starting selections.
Mc-genetics from character creation give bonus base stats now.
Some genetic starting traits have additional benefits.
One random profession has a yellow bonus, also giving you more options for first essence.
Other:
Cleaned up some decriptions/tutorial etc.
Updated story/lore stuff to be more consistent.
Druid has a new starting passive, granting a bonus based on stance.
Expanded fairy help suggestions
Unique looks and some abilities are kept after fusing, if the species matches.
Characters can toggle between guard and shield as defensive action. (testing for now)
many small QoL changes
some new "cheats":
"skill+ +skillname" list species with that skill (e.g "skill Fireball").
"passive+ +passivename" to list passives.
"glimpse" to reveal gallery temporarily without messing with unlocks.
those don't flag a file as cheating.
While a file is flagged as cheating, you're now never encumbered.
Noteworthy bug fixes:
Soft lock when a character had regeneration/bleed effects at the same time in a specific order.
AI-focus setting didn't do anything.
character quest rewards were always the same
some types of dating action didn't immediately update stats.
growth essences only applied to fusions and not eggs.
some elemental weaknesses weren't consistent with tooltips.
Next:
I still have to write descriptions for scenes/events, which was kinda the main thing I wanted to do this update.
Next I'll probably clean up/add some overworld events, fill in town stuff and add many rare world objects/biomes etc.
Otherwise there aren't that many placeholders etc. in the game anymore and the core will soon be mostly finished.
Download links
Внимание! У Вас нет прав для просмотра скрытого текста.

Comments 12
Add comment
Информация
Посетители, находящиеся в группе Guests, не могут оставлять комментарии к данной публикации.
Best games
My New Life - Version 2.1 + Extras Jack's Life
You will assume the role of a young person in your city where you live the hottest situations....
The Twist - Version 0.47 Final Cracked
It's a choice-based dating sim/visual novel game. The game is real-time 3d (not rendered...
Dating my Daughter - Version 0.21.5 Extras
You’ll assume the role of a divorced father who hasn’t seen his daughter in years. Now that...
Big Brother - Version 0.13.0.007 (Cracked+Mod) (FREE)
Main character - Max, young guy who is living in poor family with mother and two sisters....
F.I.L.F. - Version 0.13.3 + compressed
You the main character come home from a long time away. Greeted by your mom and sister you...
Glamour - Version 0.44
Main character (a guy or a girl, your choice) from a small town turns 18 and it's time to go...
Latest comics
Mercenary Breeder
Ongoing fantasy comic....
This Romantic World
Comic takes place in a reality where the movement of free love never ended. Sex is now casual...
Mark of the Wild
World of Warcraft porno comics!...
Peach Sex Odyssey
The princess wants to experience new sensations, but will Mario help her or hinder her?...
After Avatar (The Last Airbender)
Hi, im Emma Brave and I draw NSFW cartoons and comics! If you want to keep up to date with the...
Completed games
Desecration Of Wings
...
Street Fighter X - Remake
Explore the joys of meeting the characters you love and desire from the SF series in a fun and...
One Night with CLARA
ou are going to meet a girl you've found from dating application. Her name is CLARA. You will...
My Sister Mia - Version 0.5 Act 1
...
The Story Of The Survival Of John Smith - Version 0.33
...
Vicious Circle
You play as a guy who lived all his childhood in an orphanage and now has come to go to...
© 2017-2022 AduGames.COM | Download adult games for FREE!