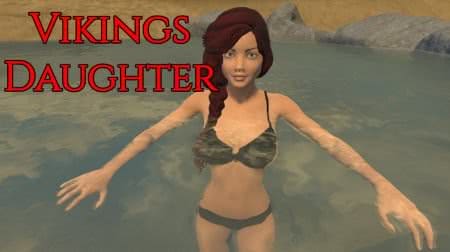 A village lies abandoned, its people either killed or taken by a rival clan! You, a smith’s son visiting to deliver some weapons, are roped into getting them back by the chief’s beautiful daughter. Explore the land, become a renowned warrior and find plenty of women to take to your bed along the way! Viking's Daughter is an adult RPG with beautiful 3D graphics set in the time of the Vikings.

Changes after BETA
We have added one extra dialogue for Hertha and a dialogue between Hertha and Sigrid after the last quest.

Story & Quests
In this build, we have mainly focused on the story and improving the AI, so a lot of new dialogues have been added.
There are two new quests with 10+ tasks each and one big quest, which cannot be completed in this version as it’s the longest we have done so far and will require visiting a different zone and interacting with a character there.

AI
We have added more character AI behaviors such as an archer and a spearman, they could be used both for enemy and friendly NPCs. A couple of things had to be improved like the target detection system and the chase system.
There’s a boar enemy added in Skadiland, which is also used in one of the quests and it’s the first animal that’s using our new AI system, the rest will be updated soon. We have spent some time working on a few more animals and environment models, but decided to include them in the next build.

Bug Fixes & Improvements
Fixed a bug where Hilde’s quest after her last NSFW scene doesn’t start if you exit the scene before it is completed.
Entering areas will cause characters to play specific animations like setting up a trap - will be extended to improve the AI in the village, for example to fix weapons if characters are close to the backsmithing area.
Download links
You can download games from keep2share, fboom or uploaded using links below. If you want to use MEGA, Google drive or Workupload, you need to be in AduGames friends user group. About this read in FAQ here https://adugames.com/faq.html

Comments 4
Add comment
Information
Users of Guests are not allowed to comment this publication.
Best games
Melody - Version 1.00 Extras
You play a session musician who has had a busy lifestyle, having worked in various cities and...
Fashion Business - Episode 2.2 - Version 18 + compressed
This Game is about Monica. Monica is a "Rich B*tch". Monica is the Boss. Most of all Monica...
Dating my Daughter - Version 0.21.5 Extras
You’ll assume the role of a divorced father who hasn’t seen his daughter in years. Now that...
Milfy City - Version 0.6e
A young student finds himself in the school therapist office, after a humiliating moment with...
Dreams of Desire: The Lost Memories
A side-story starring Tracy that details the events of the main game from her perspective....
The Secret Reloaded - Version 0.4.3a Christmas Edition + compressed
Moving means troubles, worries and lots of wasted money and nerves. But not with Mary. When my...
Latest comics
The Poker Game 3 - Full House
Lexi is looking for answers to why she ended up fucking Herbie’s friends during the last 2...
The Cummoner - Chapter 1 - 22
Comic series about the magical and erotic adventures of young sorceress Vilga and her various...
This Romantic World
Comic takes place in a reality where the movement of free love never ended. Sex is now casual...
S.EXpedition
Really long comics about space adventures, crazy sex with monster girls and even some plot...
The Rock Cocks
Are you ready to rock… with your cocks?!...
Completed games
Happy Quest
Happy Quest is a casual match-3 game. You are a kind hunter in the town. Your quest is help...
Lancaster Boarding House - Final
The game places you in a Boarding House somewhere in the US along with other young adults and...
Crystal - Part 1-3
This is a completely rewritten version of Ashford Academy. Ashford Academy is a game where you...
Experiment Sisters
Shot futa game....
Zoe's Temptations - Version 1.0 Final
...
Lewd Stories of Trinity: First Valentine’s Day Date
...
© 2017-2020 AduGames.COM | Download adult games for FREE!