In this game you play as a young man, whose family inherited a mansion from a distant relative. There you are going to reveal some mysteries and to gain some dark powers. You will have to face demon attacks, to meet some strange persons, to protect your family (mom and sister), and to use their gratefulness to gain control over them and to make them your sex slaves.

- Added + 2 new options (or 4 scenes) for Emma and Kelly in the living room
Each of 2 options has 2 scenes showed differently based on whom you choose to play the main role – Emma or Kelly.
- Added 1 new big scene for Ann and Susan in the police station. 6 illustrations for each girl

Bugs and errors
- Bug: when you try to use ”Feed the dog” option on Jessica playing domination route, it always fails. The scene was available only on love route.
- Logic bug: players could use smoke potions during the fight with red or yellow demons even if they had no such potions in the inventory.
- Image error: when you look at the town map, forest locations are shown as “Under construction”, though they are already exist in the game.
- Image error: when using dark theft on Jessica's pants, instead of pants floating over, a text message floats over saying "jess_skirt" not found
- Image error: game crashes when Jessica is trying to cover both upper and lower parts of her body with her hands while wearing dog costume.
- Image error: in the kitchen, if you talk with Emma and Kelly about your powers while having Emma’s submission points between 40 and 70, you can get message “image not found”.
- Image error: if you visit Jessica in the bathroom having her love points above 40, the game crashes because of the image failure. A Tale of Eden - Final 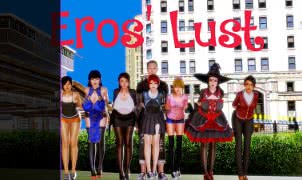