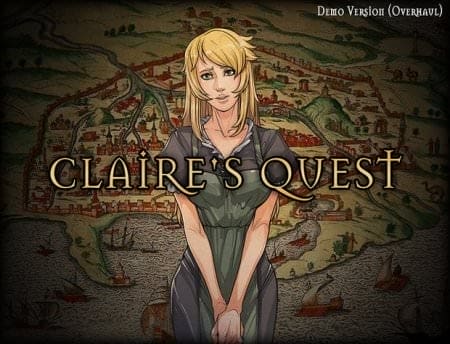 About game
Claire's Quest a highly-interactive, non-linear adult RPG, set in a dark fantasy setting inspired by the early Renaissance and made using RPGMaker MV. Unlike the majority of RPGMaker games out there, however, this game is totally devoid of any form of combat or grinding.

What separates an adult game from simple porn is the player input. Yet, if you've ever played any kind of adult game, you might sometimes feel like no matter what your input, the game progressed exactly the same anyway. We mean to change that. Claire's Quest a highly-interactive, non-linear adult RPG, set in a dark fantasy setting inspired by the early Renaissance and made using RPGMaker MV. Unlike the majority of RPGMaker games out there, however, this game is totally devoid of any form of combat or grinding. We wanted to toy with a stereotypical fantasy RPG setting - but instead of the player controlling a hero, or an adventurer, or anyone with any kind of outright power to change the world... we instead put the player in the shoes of the titular Claire - a naive, desperate refugee fleeing a terrible war that has taken everything she has ever known from her. Claire is thrust into a world without innocence, where the very worst of humanity and all its societal evils are on full display. She seems doomed to meet with a dark fate - but you can fight to prove otherwise...

... or, you can force her to succumb to her base desires.

In Claire's Quest, we really wanted to convey to the player that their choices really do matter. Every decision you make will have consequences - and not just small consequences, either. Your every decision could drastically alters the way your adventure plays out. That beggar you helped way back then on a whim... becomes the difference between success or failure, freedom or enslavement, and even life... or death. Every single playthrough could turn out completely differently. So how will Claire fare in this dystopian world she finds herself in? With your choices, you'll decide.

Changelog
NEW ADDITIONS:
* Default RMMV tiles completely replaced with our new, customised tiles, made especially for Claire's Quest. Several maps have been remade, edited, or are simply brand spanking new.
* Default RMMV sprites completely replaced with customised 'tall' character sprites.
* Default RMMV portraits completely replaced with hand-drawn, unique portraits. This includes Claire, who uniquely has a series of 8 expressions she alternates between based on her reactions and circumstances.
* Default RMMV chests replaced with unique ones, including environmental niche chests like tree trunks.
* New background sounds to complement the music, as well as new sound effects for various actions like picking up items.
* UI has been completely rebuilt, featuring totally new character screen that interacts with attributes.
* New "Inn Groping" scene in the Hookton Hilltop Inn, complete with CG.
* Hookton Hilltop Inn BJ scene CG sets have been remade. Many additional variants now also available.
* Introduction/Tutorial phase of the game completely reworked.
* New title screen.
* Many, many more minor changes, albeit too many to list individually.
Download links
You can download games from keep2share, fboom or uploaded using links below. If you want to use MEGA, Google drive or Workupload, you need to be in AduGames friends user group. About this read in FAQ here https://adugames.com/faq.html

Comments 1
Add comment
Information
Users of Guests are not allowed to comment this publication.
Best games
Good Girl Gone Bad - Version 1.2 (Nat DLC)
You play Ashley and make choices that will affect her story in a meaningful way. Are you a...
City of Broken Dreamers - Version 1.10.1 - Chapter 10 + compressed
Los Angeles, 2042. A city ruled by corporations. A city ruled by the elite. A city that...
Treasure of Nadia - Version 95092
Treasure of Nadia is the followup to Lust Epidemic. In Treasure of Nadia you take control of a...
Fashion Business - Episode 2.2 - Version 3 + compressed
This Game is about Monica. Monica is a "Rich B*tch". Monica is the Boss. Most of all Monica...
Lancaster Boarding House - Final
The game places you in a Boarding House somewhere in the US along with other young adults and...
Dreams of Desire - Episode 12 Version 1.0.3
You play as the middle sibling of a family living together with Mom, an older and a younger...
Latest comics
This Romantic World
Comic takes place in a reality where the movement of free love never ended. Sex is now casual...
The Poker Game 3 - Full House
Lexi is looking for answers to why she ended up fucking Herbie’s friends during the last 2...
S.EXpedition
Really long comics about space adventures, crazy sex with monster girls and even some plot...
Peach Sex Odyssey
The princess wants to experience new sensations, but will Mario help her or hinder her?...
Zombie
Small comics about horny zombies and sexy girls....
Completed games
No More Secrets - Version 0.11 + compressed (reupload)
The whole thing began a few years ago when Brian's mother had died. She was sick, but he had...
CODE: VALKYRIE
A third person shooter with an exhilarating shooting system, smooth movement, and high-quality...
Legal Today - PREMIUM
...
Oathbreaker - Season 1
A veteran Warlock finds herself in a political conspiracy when she is summoned by the...
My Strange Sis - Version 1.0
...
The Photographer 3 - Completed
...
© 2017-2021 AduGames.COM | Download adult games for FREE!